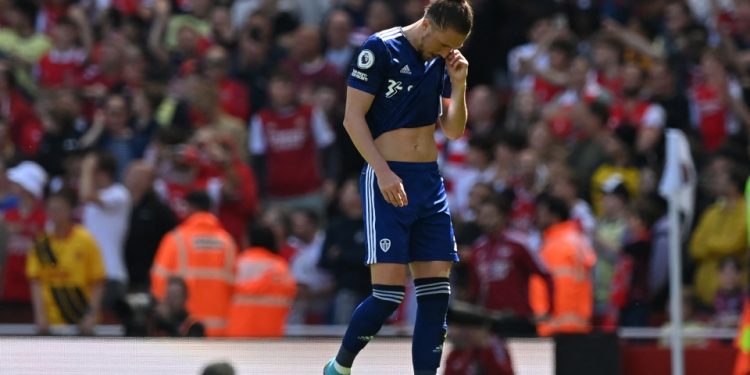 The Whites defender cut a frustrated figure after a disastrous start to the contest that saw Jesse Marsch’s side go 2-0 down inside of 10 minutes at the Emirates Stadium.

With Arsenal pushing forward to add insult to injury, Gabriel Martinelli was running towards the corner flag when the Leeds skipper lunged in with an aggressive two-footed challenge.

Referee Chris Kavanagh initially took the decision to give Ayling a booking for the challenge, but with the Arsenal players clearly furious at the foul, the decision was referred to VAR.

While some decisions this year have been difficult to conclude, a brief look at the VAR monitor saw Kavanagh upgrade Ayling’s booking to a straight red card.

The defender’s Leeds teammates, Raphinha in particular, were furious at the sending off with the Brazilian winger sent off for his protests.

However after viewing the replay it’s clear that it was a reckless challenge from the experienced full-back.

While Leeds did manage to spare their blushes by stopping to rot in a 2-1 defeat to the Gunners, such a sending off is a bitter blow.

Ayling came towards the Brazilian at pace

As a result, Martinelli was sent flying and Ayling knew he’d done wrong

As well as subjecting his teammates to more than an hour of football against Mikel Arteta’s side with a numerical disadvantage, it means that they’ll now face an uphill task in their battle against relegation.

Ayling is expected to be handed a three-match suspension for the challenge, meaning that his Premier League season is effectively over.

Speaking to Sky Sports, Jamie Carragher delivered his verdict, saying: “What an idiot. The lack of professionalism from his teammates and what this could mean going forward.

“It’s not just going down to 10 men, it’s a disgusting tackle going in with two feet and reminds me of a tackle that Vinnie Jones did a long time ago.

“What he thinks is going to happen on the back of that, I don’t know. It was an obvious red card.

“To put your team down to 10 men, miss the last three games of the season, that might be the last game that Luke Ayling ever plays in the Premier League.”

As a result, Marsch will need to find a different solution to his team’s defensive woes as the Yorkshire do everything that they can to get the points to keep them in the top flight for another season.

Emerging Europe will need 107 years to close its gender gap