Who is Julian Alvarez? The River Plate wonderkid wanted by Man United who had trials with Real Madrid but plays with rivals Man City on FIFA 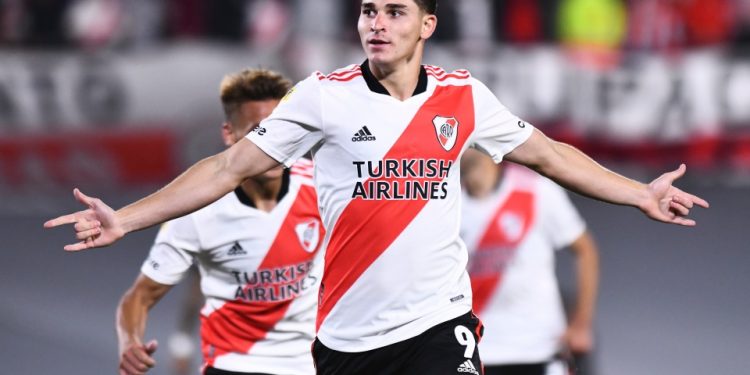 Manchester United are hoping to fight off competition from a host of European clubs to the signing of River Plate wonderkid Julian Alvarez.

Barcelona, Real Madrid, Inter Milan, and Bayern Munich are all keen on the award-winning 21-year-old Argentin, who has been in astonishing form in his homeland.

Yet United are ready to make their move by activating Alvarez’s £17million release clause with doubts over a number of their attacking options.

Anthony Martial is desperate to leave Old Trafford while both Edinson Cavani, 34, and Cristiano Ronaldo, 36, are in the latter stages of their careers.

So how much do we know about potential replacement Alvarez? talkSPORT.com takes a deeper look…

The Argentine was almost destined for a path straight to Madrid after starring on trial in the Spanish capital when he was only 11-years-old.

However, he was too young to make the switch permanent as Madrid’s policy is to wait until at least 13 before signing foreign talent.

Alvarez’s father Gustavo told Goal: “It would be a dream if he could stay. We are a working family.

“I work in a cereal company and my wife Mariana is a kindergarten teacher.”

Alvarez is already winning trophies despite being just 21 years old

He also had trials with Boca Juniors before he joined the club’s rivals River Plate from local side Atletico Calchin in 2016.

Since his arrival in the River first-team, Alvarez has won the Copa Libertadores, Copa Argentina, and Primera Division, among other trophies.

Alvarez was the Primera Division’s top scorer in 2021 with 20 goals in 35 games, while also being named the South American Footballer of the Year.

His contract with River Plate ends in December so the club would want to avoid seeing the starlet – nicknamed ‘The Spider’ – leave for free in 12 months.

Alvarez even won the Copa America alongside Lionel Messi in 2021

The youngster primarily operates as a forward where he has managed 19 goals and seven assists in only 16 appearances.

Alvarez became a regular starter in 2020 with manager Marcelo Gallardo utilising him as both a centre-forward and as a second striker.

Yet, he broke into the first-team on the right due to a succession of attacking options at the time including Eintracht Frankfurt star Rafael Santos Borre.

Alvarez was deployed in a similar position for Argentina, appearing as a second-half substitute in the 4-1 win over Bolivia at the Copa America.

Julian Alvarez: What has been said?

River manager Gallardo: “He is a player that coaches love for his quality, for his generosity, and for his playfulness.

“Any coaching staff would love to have him. He’s very young and has a long way to go.”

However United fans won’t be too impressed to learn that Alvarez once admitted he plays with the club’s arch rivals Man City on FIFA.

“Playing in Europe is most people’s dream because of those leagues’ quality and what it means to be at those clubs,” he told Radio La Red in October 2020.

“But I am taking it easy. Obviously I talk to my agent and my family, but I know I have to stay focused on what I’m doing.

“Later the time will come, through the work I am doing.”

Alvarez added: “On the Playstation I play with Barcelona or Manchester City.”

Six of the best: Baltic beaches