Why Does Western Washington Have Some of the Worst Roadway Icing in the Country? And the Next Snowstorm in Sight 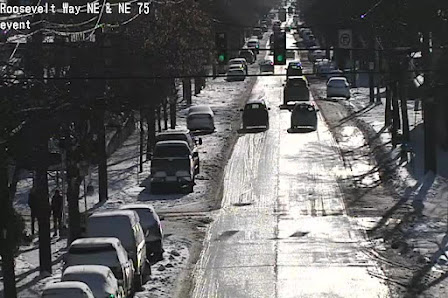 Western Washington can brag about world-class coffee and leading corporations, but did you know we also have some of the worst road icing conditions in the nation when we get some snow?

Icing so bad that mayors can lose their jobs when they forget this meteorological fact?

Icing that can cripple parts of Seattle, killing and injuring both drivers and pedestrians?

It happened again last night and today.  Let me tell you why.

Western Washington has a mild winter climate and our soils and roads cool down in autumn, of course, but remain well above freezing during the winter.

Then we get a snow event, with several inches falling on the roadways.  This snow starts to melt into a slush layer.

Next, much colder air comes in, as the low center and upper trough that produced the snow moves out.  The air temperatures become cold enough that the slush layer begins to freeze…and if cold enough (like yesterday today), it freezes solid to the roadway surface (and almost impossible to remove at this point).

The only way to stop this is to pretreat all roadways with a deicer (such as salt or potassium chloride) BEFORE the show falls and to remove snow after it falls, but before it freezes.   Judging from driving around Seattle today, not enough of both were done.  Many of the city’s major roadways are not in good shape.

Another interesting aspect of this event has been the terrific steam fog produced over the Sound and other local water bodies.   When very cold air passes over relatively warm water, you can get tendrils of steam fog.

To illustrate, take a look at a video shot from the north side of the Kitsap Peninsula by Greg Johnson of Skunk Bay Weather.

The warm water supplies moisture that condenses in the cold air moving above.   Generally, you need at least 20F differences between air and water temperatures to get good steam fog.  With the Sound at around 50F and 20F air moving in, we had the necessary conditions.  Strong winds help the mixing and fog formation.  We had that as well.
The temperatures last night were exceptionally cold, with some areas around NW Washington dropping to UNDER 5F (see the minimum temps below).
Seattle dropped to 17F. Some Puget Sound suburbs plummeted to nearly 10F.  Many daily minimum records were broken and this event as a whole is the coldest period in our region since 2010.

Thursday Snow?
Finally, there is the upcoming snow event on Thursday.  Both the UW and European Center models are going for several inches.

The UW model for the same period is similar with some interesting differences (see below), with more snow on the coast and Seattle’s snow reduced by rainshadowing.  As we get closer to the event, the forecast will sharpen up.

8 things to know about the incoming Dutch government