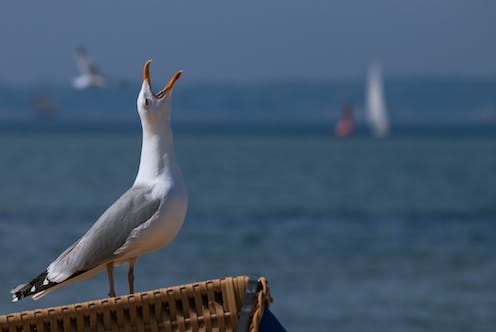 On a summer’s day at the beach, the sound of seagulls is part of the ambience. But what about when they’re in the middle of a city, or when they’ve just taken your lunch? Not a lot of people like seagulls. They’re loud, messy and quite partial to whatever you’re eating. As annoying as they may be, their reputation for brash behaviour masks a different story.

There are many different species of gulls. The birds most people think of as seagulls, the ones with silver backs and pink legs, are herring gulls.

They’re the species most likely to nest on houses and steal your chips. Because these gulls are increasingly nesting in urban areas, people see them more often. Although it might seem like there are plenty of them, the population is decreasing. Gulls that nest in natural places rather than manmade structures are in dire straits.

All seven gull species that breed in the UK are of conservation concern. Herring gulls are on the UK red list, the highest level of concern.

Some people believe the availability of food from landfills had artificially boosted the number of gulls in previous years, but in reality food poisoning from feeding at landfills as well as culling has contributed to their decline.

Gulls get a lot of hate for swooping at people, either to get food or when protecting their chicks. Sometimes I think people would be more understanding if they imagined themselves in the position of a gull. Most of us were pretty lucky to be born human, and we sometimes take things like food and safety for granted. Gulls can’t rely on a steady supply of food from the supermarket, or know that you aren’t going to hurt their chicks, which both parents diligently care for.

When a female and male pair up, they tend to do so until death. Each pair defends a nesting and foraging territory. The loud calls they make might seem annoying and pointless, but it is the gulls’ way of telling others where their territories lie.

Gulls are what is known as kleptoparasites. They steal food from each other and from other species. This is not unusual in birds but gulls are unusual in that they take food from humans. This is risky behaviour. An animal the weight of a bag of sugar is massively disadvantaged against a human. In fact, only a small minority of gulls are bold enough to do it.

People perceive gulls as greedy. They seem to gobble up anything they can find in one big gulp. But what they’re actually doing is storing food in their crop, a pouch that functions in a similar way to a shopping bag, from which food can be eaten later. From a gull’s point of view, if you don’t take the food that’s in front of you, you might go hungry. It is a result of need, not greed.

They don’t have it in for you, they are trying to find enough food to survive. A study found these clever birds have learned a complicated process to make sea squirts safe to eat. A herring gull has even been observed using bread to bait fish.

Gulls living in towns are very adaptable and savvy. They even learn patterns of human activity to decide where and when to forage. A few years ago I started a research project to understand gulls’ food-related interactions with humans. I had noticed gulls would often snatch food from people by catching them unaware. Previous research showed several bird species are attentive to human gaze. I wondered if gulls pay attention to where people are looking and prefer to approach food when they aren’t being watched.

I designed a study to test this idea, and timed how long it took gulls to peck at a sealed bag of chips I had placed on the ground in front of me – once when I was looking at them and once when I was looking away. I found gulls took longer to peck at the chips when I was watching them. I also found gulls are attracted to food they have seen humans handling, probably because they have learned we often leave food waste lying around.

What does this mean for our interactions with gulls? Well, we can reduce unwanted encounters by disposing of our food waste properly. If we choose to eat our food in a gull hotspot being vigilant will help: look for where gulls are and watch them. Check behind you, sit under an umbrella or by a high wall so that gulls can’t swoop in from out of your sight.

Gulls’ behaviour may seem bad, but we have a lot of scope to change it without resorting to extreme measures. Gulls are making the best of a bad situation caused by our own activities, and our towns may be their last refuge.

Madeleine Goumas does not work for, consult, own shares in or receive funding from any company or organization that would benefit from this article, and has disclosed no relevant affiliations beyond their academic appointment.

Boylesports: Get £20 in free bets plus a £5 free in-play bet on Chelsea vs Tottenham