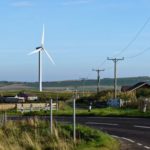 “U.S. counties where wind energy was built saw increases in per capita income of 5% and per capita gross domestic product (GDP) of 6.5%, relative to the average trends seen in counties that did not have new wind turbines,” reports Carbon Brief.

The positive economic impacts were directly caused by the installation and operation of wind farms, found Dr. Eric Brunner of the University of Connecticut and Dr. David Schwegman of the American University, who looked at the variation in wind power growth across 2,971 U.S. counties, 465 of which installed turbines. The researchers say their approach “allowed them to isolate and prove the causal effect of wind farm construction on economic outcomes,” Carbon Brief says.

New wind projects had more impact in rural communities and were able to provide an economic boost in those areas. Although they did not increase the quantity of jobs, the installations did produce a small shift away from agricultural employment towards construction.

Areas with new wind farms showed a 2.6% rise in home values compared to the average in counties without new turbines. That led to an increase in property taxes, which then supported local government spending on services like schools.

The wind farms were not enough to stem the decades-long tide of economic loss eroding rural communities, and new installations did not effectively hold back population decline in rural areas. But the results are still “meaningful,” said renewable energy policy expert Eric Lantz, who was not involved in the study, even though wind farms could not address every socio-economic issue.

Brunner and Schwegman acknowledged the wind farms’ failure to prevent rural population decline as an important message for policy-makers. But also important, they say, are their findings that the “benefits increase at an increasing rate with the amount of installed generating capacity per capita” and that rural communities with multiple installations and greater wind energy capacity gain the most from new projects.