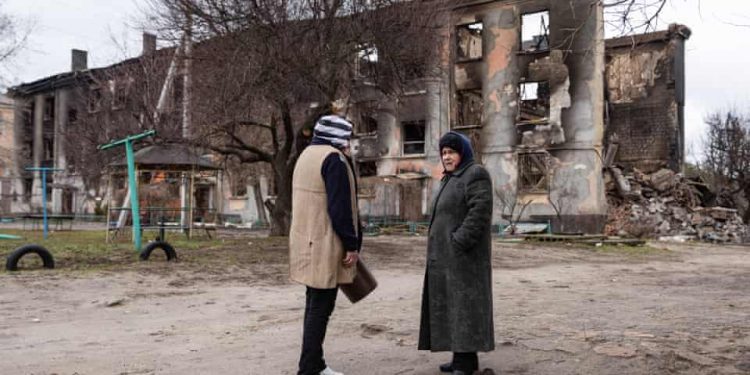 Happiness lies in ruins. This small town – Schastia in Ukrainian – has been out of the headlines since Moscow took its brutal war against civilians to the country’s biggest cities.

But it is here, and in nearby Volnovakha, that the illegal tactics of terrorising civilians for military aims, honed in Syria and then brought back so close to home, have reached a grim apotheosis.

There have been terrible strikes on homes, schools and hospitals around Ukraine. But residents of both towns say the barrage of shelling, rocket assaults and air strikes since the start of the war has damaged or destroyed nearly every building in their towns, a comprehensive devastation as yet unmatched elsewhere.

The Russian flag has now been raised over the ruins of Schastia. In Volnovakha, the attack is still so intense that dead bodies lie uncollected, says local MP Dmytro Lubinets. Ukrainians still brave enough to run rescue missions are going back only for the living.

Thousands of them are trapped in basements, with dwindling supplies of food and water, sheltering from an apparently senseless attack on a town Lubinets says has no military defenders in its centre. The line of contact is 20km away, he says.

“It never stops, every five minutes there is a mortar landing or artillery shells, some buildings have been hit by multiple rocket systems,” he said by phone.

On Friday morning, Ukrainian media claimed that a Russian war plane bombing “residential areas and civilian infrastructure” in the area was shot down.

Pavlo*, a Schastia native who evacuated his family, said 80% of the town was damaged in an intense bombardment that lasted days, and as in Volnovakha, barely any buildings were entirely untouched.

“People started evacuation after three days, when Russian forces stopped bombing the town and people could leave the shelters,” he said. “People didn’t have water, gas, electricity for three or four days because of the bombing. They used all kinds of their weapons, Grad rockets, artillery and mines.”

The devastation in larger cities like Chernihiv and Kharkiv is deadly and terrible, but has still affected only a relatively small portion of the towns, even if the terror it instils casts a shadow over every civilian still trapped there.

But what Russian forces appear to show in these smaller towns is that they are willing to leave behind them a wasteland on a massive scale, as they did in Grozhny in Chechnia, or – together with Syrian forces – in the ancient city of Aleppo. Neither humanity nor heritage stopped them.

Attacking civilians, and the infrastructure that supports life including hospitals and schools, is illegal under international law. It has no direct strategic advantage for an advancing army. But it is extremely effective at breaking morale of a resisting population.

The “I love Volnovakha” sign in the centre of town, which has survived somehow, has a backdrop of ruined houses. It appears at the start of a video, filmed from a moving car, which captures crumpled shops, buildings blackened by fire, and a road strewn with debris.

Before the war, the population of the town was 25,000. Lubinets says at least 3,000 people are trapped, but possibly many more. Hundreds of them are children. Requests for a humanitarian evacuation corridor have gone unanswered, so the military and other volunteers are risking their lives to bring people out in small groups.

“We drive under fire to the places where people mostly concentrated, schools, hospitals, grab them out, put them in the car and bring them out, because the shelling never stops at any second,” he said.

“Its impossible to use buses because they have low mobility. Always when you go there you will get punctures, so you just have to drive [the car] out for about 10 minutes to places where big buses can come.”

For many residents of these towns, their lives are as irreparably shattered as their homes, barely a week into this war. Their suffering may be a terrible template for the damage Russia will inflict on others, if Moscow tries to pound bigger towns and cities into submission.

“There was life before, and life after, and now I just feel emptiness inside,” said Iyrna*, who fled in a long, lonely journey through a succession of towns and cities under attack – first Chernihiv, then Kyiv and finally to relative safety in the western city of Lviv. “Nobody knows what is going on there.”

“A friend [still in Schastia] told me: ‘I can’t even go to your place to try and collect some papers, or other things, everything there is totally smashed up,’” she said. “Ninety per cent of houses are damaged.”

She was just out of hospital after major surgery when the war began, and her husband is serving on the frontline. “For three days I was in such deep stress I couldn’t eat or drink, even now they have been swept out of my memory. I was so exhausted I had hallucinations that my husband was with me.”

Shastia and Volnovakha were on the frontline for eight years of the smaller-scale war between Ukrainian forces and Lubinets believes the carnage inflicted on the towns now is revenge for their resilience through those years.

“From the very first day of the war they started shelling us directly … They are trying to wipe out the town,” he said. “I think someone in Russia is destroying [the town] as a reminder of what they can do to someone who doesn’t break in the face of Russian aggression.”