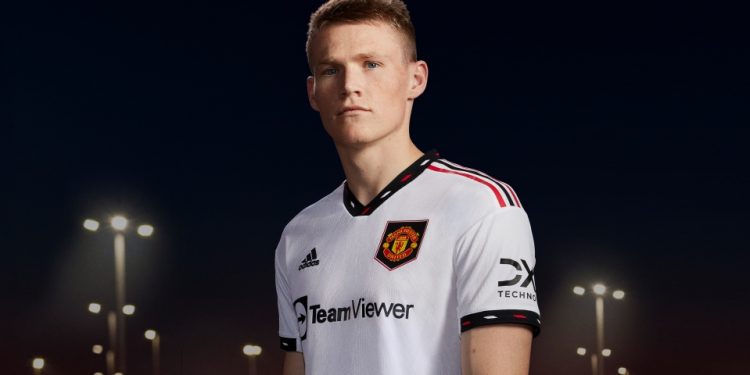 Manchester United have revealed their new away kit for the 2022/23 Premier League season in front of adoring fans in Australia.

The Red Devils have, once again, gone for a white change strip, which offers a contrast to theIr home jersey.

As did Man United and Lionesses forward Alessia Russo

The club announced they and adidas were inspired by the club’s ‘philosophy of youth, courage and success’.

Another nice touch is the black and red stripes on the shoulder which will go down well with the club’s fans.

Meanwhile, red and white symbols are on the black collar to bring through Manchester United’s colours.

Inigo Turner, design director at adidas said: “We approached this kit that the club will wear in opponent’s stadiums around the world with a fresh perspective, aiming to capture an indisputable sense of collective conviction and common purpose.

“Wherever the club goes, we wanted it to carry its philosophy of youth, courage, and success, proudly woven into the fabric of the kit for players and fans alike to wear together.”

Supporters down in Australia got to see Marcus Rashford, Luke Shaw, Bruno Fernandes, and Jadon Sancho model the new shirt.

And they gathered in huge numbers in Melbourne’s Federation Square.

talkSPORT presenter and Manchester United fan Mark Goldbridge used the magnificent attendance for a cheeky dig at Man City too.

Their city rivals recently unveiled new signing Erling Haaland at the Eithad but the crowd in Melbourne looked bigger, something he was keen to point out.

He posted on Twitter: “United away kit reveal in Australia had a bigger turnout than Haaland unveiling at the Etihad

Impressive turnout in Melbourne’s Federation Square for the #MUFC away kit launch pic.twitter.com/hItEZuHjzD