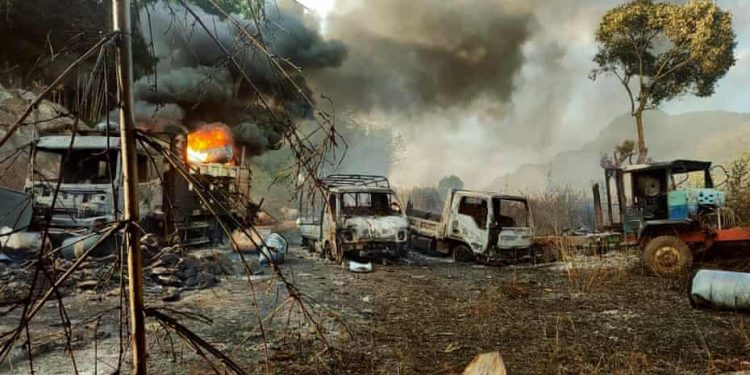 “The events of last week are just par for the army’s inhumanity and immorality.”

So says Michael Isherwood, chair of the Burma Humanitarian Mission and program director of Backpack Medics, after Myanmar’s junta massacred more than 35 people, including two Save the Children workers, on Christmas Eve. At the time, the attack garnered international headlines, with the children’s charity calling it “absolutely horrifying”, and the UN urging an investigation.

Yet Isherwood says attacks like the one on 24 December are not isolated, and describes a military that is “randomly shooting unarmed men, women and children, who steal livestock and burn homes to the ground, who use rape as a weapon”.

The medics he works with recognise the risks and “understand that the Burma army has no morals, character or anything close to civilised decency and behaviour”, he says.

Myanmar has seen killings, imprisonment and chaos since the military seized power from the elected government led by Aung San Suu Kyi in February last year.

Resistance groups have emerged but anyone thought to be opposed to military rule risks being arrested, sentenced to hard labour, or killed. More than 1,300 people have died at the hands of security forces, according to a local monitoring group.

Another humanitarian worker, who preferred to not to be named, says: “This incident in Kayah does not mark a new level of violence. It’s not a shift in the pattern of the approach of security forces. It’s not unusual in this context. This is a normal tactic.”

She believes the attack was intended to “oppress through fear the civilian population” rather than specifically target aid workers.

“Since they’re blatantly, egregiously and frequently targeting the civil population in that way, and since that will often happen in areas where aid activities are needed, then of course that raises the collateral risks to aid actors,” she says.

Her organisation would continue its work regardless, she says.

A clampdown on domestic media has made details of alleged atrocities hard to confirm, she says, but the link to an international charity in the Christmas Eve attack has offered a grim insight into the risks the people of Myanmar regularly face.

According to the Karen Human Rights Group, in the Sagaing region 11 civilians were burned alive on 7 December and 40 people were killed in three different attacks in July.

Inger Ashing, the chief executive of Save the Children, put out a statement saying: “The people of Myanmar continue to be targeted with increasing violence and these events demand an immediate response.”

‘It happened quite suddenly’

On Christmas Eve, women, children, and two Save the Children staff members – both new fathers, aged 32 and 28 – were among the victims found on a highway outside Moso village in Kayah state, eastern Myanmar, where pro-democracy rebels have been fighting the military. Save the Children says its staff were travelling back to the office after working nearby when they were caught up in the attack.

According to state media, the Myanmar military said it killed a number of “terrorists with weapons” after people in seven vehicles refused to stop. Images of the scene show the blackened remains of multiple bodies inside torched trucks.

One international staffer living in Myanmar, who requested anonymity for safety reasons, says: “In this case, I don’t think there was any particular sense that the road was a risky one. It happened quite suddenly. Doing it on Christmas Eve probably was not accidental.” Many in Kayah state identify as Christian.

The humanitarian worker says as far as their operations are concerned, they’d be keeping in close contact with staff in Kayah state and tracking their travel.

“We’re trying to do what we can to advise people on where is safe to go and where is not but you can’t really know. It’s so widespread.”