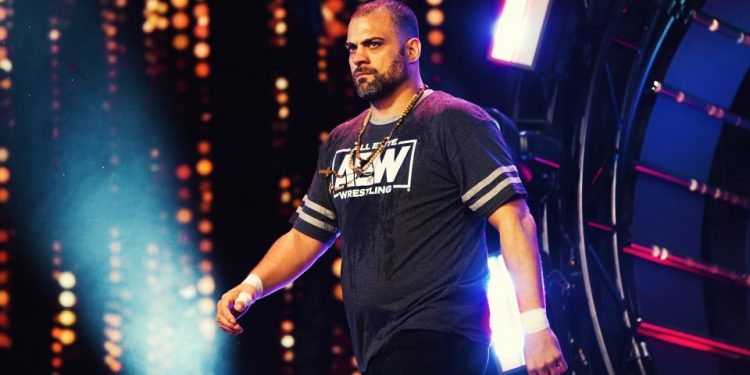 Eddie Kingston is a veteran in the pro wrestling industry, but the New Yorker will be the first to admit that performing in AEW is the biggest stage of his career.

Having just turned 40 earlier this month, Kingston is arguably enjoying the most successful stretch of his career and has quickly become one of the most beloved stars to AEW fans.

A high point of his AEW run has been his very real friendship with Jon Moxley finding its way to TV. Fans loved them as rivals, pined for them as a team and it’s been everything we hoped.

Speaking to talkSPORT, Kingston opened up on their infamous promo on Dynamite where the two came head-to-head and had many fans calling it segment of the year in 2020.

“That was so much fun to be in there with him. A lot of it was just… I don’t think about what I’m going to say and neither does Mox.

“We may have a line in our head and we’re like ‘aight, we’re just gonna say that line and see how the people react or our opponents react’ then we see what comes into our heads after that so we can be from the heart. It’s not scripted,” said Kingston.

But the former IMPACT man is not against scripts. He can understand their value, just not to him.

“Me and Jon are two people who are lucky enough, well, Jon is talented enough, I’m lucky enough [laughs] where I can’t remember things, so you can’t give me a script! You got to give me little points and then I can work with that and build off that.”

“That whole face-to-face wasn’t supposed to happen like that, we just got into it. We felt the moment and we spoke about certain things that are real life in there to mix in with the wrestling,” Kingston said of their famous promo.

Jon Moxley and Eddie Kingston are great rivals, but even better friends

“At the end you’re just so amped up and you’re so… I don’t know. I go into a different world when I’m out there, you know what I mean?

“So when I come through the curtain I’m not thinking ‘Oh, man. That was great!’ or anything else, I need a minute or two to get away from everyone to breath and then come back to this reality, or whatever you want to call it. Afterwards we were like ‘well, it felt good!’

“Jon loved it, of course. Jon has been one of the biggest advocates for me in my whole career since we met,” Kingston revealed.

“A lot of people don’t know that he was trying to get me into WWE years ago. Trying his best to do what he could. ‘Hey, I told this guy to check you out.’

“And this is me and Jon not talking for years and out of nowhere he’ll text me ‘Hey, I told so and so to watch your match from blah blah blah’ and I’ll be like ‘Who is this?’

“When we ran into each other when I got to AEW, he even said and I agreed ‘Eddie, it feels like I saw you two weeks ago,’ and at that time, we hadn’t seen each other in about eight or nine years.

“It’s just how our friendship is, but Jon is one of those dudes that I would be forever grateful for having him as a friend, and I don’t call a lot of people my friend. But he’s definitely, without a shadow of a doubt, one of them.”

Jon Moxley is putting his health and his family firstAEW

Moxley has recently taken a step away from AEW and professional wrestling to enter a rehab programme to deal with alcohol abuse problems.

AEW owner Tony Khan, with Moxley’s permission, shared the news publicly and Kingston is proud of his friend addressing his problems fresh after becoming a father for the first-time.

“That was real man stuff. He understood that his family is number one, that’s grown man stuff.

“But you’ve got to do what’s right for you and I’m proud of him. I’m very proud of him,” Kingston said, with the pride clear in his face.

After all the hard work Jon Moxley and Kenny Omega put in, the ring spoiled things

Fans were ready to see Kingston and Moxley become a team, but it didn’t happen until Kingston ran down to make the save for Moxley at the end of his exploding barbwire deathmatch at AEW Winter is Coming in 2020.

Kingston covered his friend to shield him from the impending explosion, but the problem was the ring didn’t ‘explode’ as planned, so Moxley and Kingston were left lying in the middle of the ring to close out the show.

The next week, the pair cut a promo where Kingston said he had passed out on Moxley from having a panic attack. We asked him how they came up with the cover story in the wake of such disappointment.

“The idea for the next day, how we were going to ‘cover it’ or whatever you want to call it, I took a real life experience where I did have a panic attack before I had to go to court,” kingston explained.

“I didn’t pass out, but I was very close because I was so amped up and so scared of going to jail that I was shaking. That’s how mentally I did myself in and I had a panic attack. I couldn’t breath.

“I just said to them ‘well, let’s bring real life in there.’ And the things I’ve noticed since doing the Players Tribune and then openly talking about panic attacks etc, I always knew I wasn’t alone in how I felt, but now I really know I’m not the only one who goes through this sort of stuff and that’s a great feeling. Hopefully other people feel that too,” Kingston explained.

Kingston and Moxley’s big moment as a team came at Double or Nothing this year when the pair were able to compete for the AEW Tag Team titles against The Young Bucks.

While that is special in and of itself, it was also the first time AEW had a decent crowd at Daily’s Place in Jacksonville, Florida, since the pandemic started. And wouldn’t you know it, 5,000 people blew the roof off the arena for Moxley, but maybe even more so for Kingston.

Eddie Kingston and Jon Moxley came up short challenging for the AEW Tag Titles, but Kingston says they are not done

“After that match with Moxley against The Young Bucks [at Double or Nothing], for the first time, I felt like I belonged in AEW. It was because of that match,” Kingston said proudly.

“And also because we had 5,000 people in Daily’s Place and that was my first time in front of an AEW crowd really.

Healthcare Triage Podcast: What is the Reproducibility Crisis?