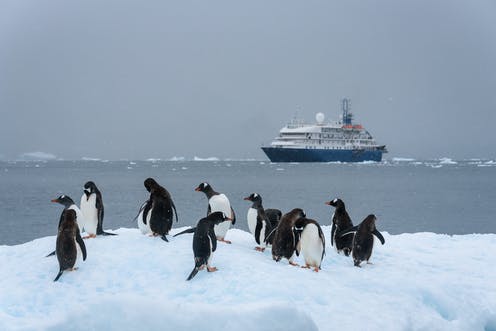 Antarctica has been relatively isolated from the rest of the world for millions of years but these days ships could potentially introduce marine animals and seaweeds. Invasive species can have drastic consequences for ecosystems, for example by taking over areas and creating a new habitat or becoming predators for species with no suitable defences.

The best way to protect against this is to prevent any non-native species arriving in the first place. Of course, any new species would still need to survive the freezing waters around Antarctica but, as it happens, the ships usually visit the areas that are warming fastest due to climate change.

Aside from a few seals, whales and migratory birds, Antarctica’s unique marine life has been largely cut off by the currents of the Southern Ocean which rotate clockwise around the continent and deflect away most floating organisms. The species that do arrive, perhaps attached to drifting kelp, are faced with year-round low temperatures and strong seasons.

Although this barrier has existed for millions of years, ships allow species to reach Antarctica and its coastal waters that could never otherwise have made the trip. Reaching the Antarctic coastline from sub-Antarctic islands can take up to three years for species associated with kelp rafts. The same species could make the same journey in just a few days if attached to a ship’s hull.

What might this mean for Antarctica and its ecosystem? In my academic research I hunt for non-native species that live on the hulls of ships that visit the continent, and I study where those ships go. I have scraped hulls and pipes, freeing ships of their barnacles and sludge to find out what species are already being transported there and where in the world they come from. Such ships travel the whole world, with many regularly visiting both the Arctic and Antarctic each year, typically via the Atlantic. Their hulls are generally only cleaned every couple years and can carry anything from mussels and crabs to barnacles, amiphods (shrimp-like crustaceans), bryozoans, hydroids (similar to anemones or jellyfish) or seaweed.

Based on my latest study, published in the journal PNAS, Antarctic-going vessels are most likely to introduce organisms from southern South America, Northern Europe, or the western Pacific Ocean.

Most voyages reach Antarctica via one of the five recognised gateway cities – Punta Arenas (Chile) and Ushuaia (Argentina) in South America, Hobart (Australia), Christchurch (New Zealand), and Cape Town (South Africa). However, our study found that an extra 53 places acted as departure ports.

There are some security measures ships could take, such as special hull coatings that algae and animals can’t stick to very well, or regular hull cleanings. Countries could require proof of a clean hull or regular inspections before permitting ships to enter certain regions.

Though logistically complex, these measures are being adopted around the world in places like Hawaii, the Galapagos Islands, New Zealand and Australia, and may provide example strategies for reducing the introduction of non-native species to Antarctica via ships. With support from the Antarctic community, these gateway ports could become locations for biosecurity screening, before ships depart for Antarctica.

Around 100 to 200 ships visit Antarctica each year, an up to 10-fold increase since the 1960s. The vast majority stick to two particularly accessible regions, The Antarctic Peninsula and the South Shetland Islands, which means these areas are most at risk.

Activities on the continent and in the Southern Ocean can largely be divided into research and its support carried out by national operators, tourism and fishing. The top 20 potential invasion hot spots are locations visited by combinations of tourism, research, fishing or supply vessels. While tourism accounted for 67% of visits to all Antarctic locations (followed by research 21%, fishing 7%, supply 5%, and other 1%), research vessels were the only ones with connections to all areas of the continent.

Therefore, different locations as well as each activity type need tailored, but consistent, biosecurity practices. We urgently need to ensure everyone in the region works together to look for new species.

So far, researchers have found only five non-native species free-living in Antarctic waters that were probably introduced through human activities. These include Chilean mussels, just like the ones we eat, and a kind of crab. Although many other species live on the hulls of Antarctic-going ships, mussels and crabs are particularly worrying because there are no similar animals in shallow waters around the continent.

Barnacles, algae and small crustaceans stuck to a ship that visited Antarctica and the Arctic each year of the study period. Arlie McCarthy, Author provided

Mussels could perhaps create a new kind of habitat, “mussel beds”, that might outcompete local species or allow even more non-native species to arrive. Crabs would represent a new kind of predation that local species might not be able to defend themselves against. Though concerning, it for now remains a mystery whether or not these animals could survive and establish populations in Antarctica in the long run or, indeed, if they will actually have negative effects on the native marine life.

For now, Antarctica and the Southern Ocean remain the least invaded marine regions on the planet and represent humanity’s last chance to demonstrate that we can manage and mitigate the risks of invasive species at a continental scale. If we do not, climate change will open the door to the world and our neglect will transform the iconic ecosystems we love.