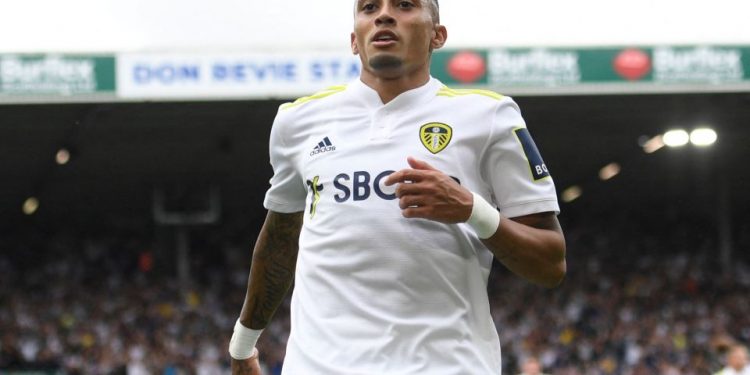 Barcelona could let slip their grasp on Leeds United star Raphinha as they look to rebuild in the summer transfer window, allowing Arsenal to swoop.

It’s being reported they are stalling on a €55million (£47m) bid for the Brazilian winger.

Raphinha is expected to leave Elland Road this summerAFP

That comes despite the fact they already have a deal agreed with the player’s agent, former Barca and Chelsea star Deco.

According to Guardian journalist Fabrizio Romano, a five-year deal for the Premier League star has been in place since February.

Raphinha has had a fine two years in Yorkshire, joining from Rennes in a £17m deal.

Barcelona, despite the deal in place, have not sewn up the transfer and it appears that could allow a Premier League club to swoop for his signature.

Romano tweeted: “Raphinha deal. Barcelona have full agreement with his agent Deco since February on a five year deal but Leeds want €55m, no plan to change their price tag.

“Barça need to be fast as Premier League clubs are back in the race, including Arsenal – but no bid submitted yet.”

The Gunners, as well as north London rivals Tottenham, have previously been credited with an interest in Raphinha having experienced his qualities first hand.

Any move for the 25-year-old Brazil international would not be Arsenal boss Mikel Arteta’s first foray into the transfer market.

Porto announced on Friday that left-footed playmaker Fabio Vieira would be leaving the club with the Emirates Stadium his destination.

A move for Raphinha would further strenghen thier attacking options as they push for a top four return.

They missed out for a sixth consecutive season as Tottenham pipped them to fourth place on the final day of the Premier League season.

Doing Business Beyond the Data