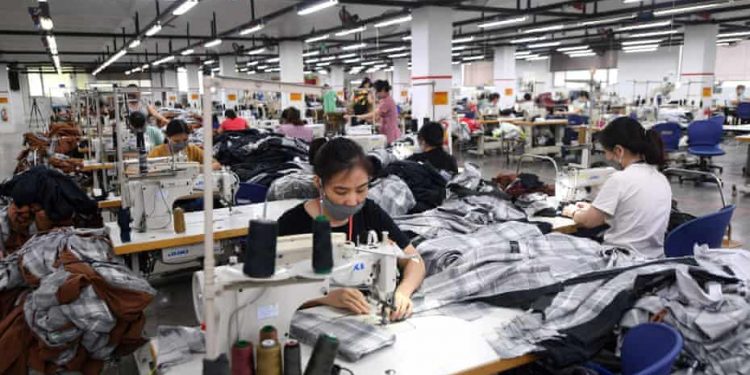 For weeks, Hoang Thi Quynh* worked and slept inside a garment factory in Tien Giang province, in southern Vietnam. She would start her shift at 7.15am and then, after a day spent sewing sportswear garments, enter an empty hall of the factory complex and settle down for the night.

Each worker had a tent, set one or two metres apart, containing a foil mat, pillow, blanket and a box to store their belongings. No workers were permitted to meet anyone from outside the factory; even speaking to a visitor over the gates was forbidden.

A Covid wave that spread across the industrial areas of Vietnam earlier this year placed intense pressure on the country’s manufacturing sector – just as factories were churning out products destined for shops ahead of Christmas.

Vietnam is one of Asia’s key manufacturing hubs and produces goods for some of the biggest Western brands in tech, garments and sportswear. News reports about the outbreak warned of delays in the delivery of iPhone 13s, and disruption in the supply of everything from Toyota cars to Ikea curtains.

“Vietnam probably does a third of all apparel production [for the US],” said Jana Gold, a Senior Director with Alvarez & Marsal Consumer and Retail Group in Washington. “Of all countries to get hit with Covid, it really impacted the industry,” she said.

Many factories asked workers to stay on site to comply with government rules designed to minimise infections – a policy that has since been dropped, including by Quynh’s workplace, which allowed her to commute from home again by November.

But production still has not returned to normal; analysts predict it won’t do so until the end of the first quarter of 2022. In the run up to Christmas, retailers scrambled to prioritise which products were most needed by shops. Some continued shipping as late as mid-November, and even chartered planes to get garments to high streets on time.

The real crisis, though, has been felt by the workers – many of them internal migrants – who power the country’s factories.

In July, when Covid cases escalated, a severe lockdown was imposed across industrial areas, banning people from leaving their homes, even to buy food. Hundreds of thousands of workers moved into factories through an arrangement known as “three-on-site”, where workers sleep, work and eat in their factory. By October, roughly 300,000 workers were doing so in Binh Duong province alone.

For workers whose factories closed down during lockdown, there was no alternative but to stay in their rental rooms, in limbo. They were unable to earn a living, yet prevented from returning home to their families. Workers had little available cash to cope with the ordeal, said Nguyen Phuong Tu, visiting research fellow at Adelaide University who specialises in factory workers’ labour rights. “Most will try to remit savings back to their family members in their hometown, so the savings they have for themselves are not really much,” she said. Though some government support was available, it was nowhere near enough.

When movement restrictions were lifted at the beginning of October, many workers decided they had enough, and left industrial areas en masse. Motorbikes, strapped with plastic bags bursting with belongings, flooded the streets. As many as 90,000 fled Ho Chi Minh City for their home provinces on the first weekend alone, according to state media.

Tran Thi Lan* was one of a reported 300,000 people who left Binh Duong, part of the garment manufacturing hub in the south. Her area was at the centre of a Covid outbreak, and she spent four months in lockdown. Eventually, she caught Covid herself. “I knew that it would be my turn to get infected. Every two weeks people got tested and the infected rooms got closer,” she said, shortly after she returned home.

Normally she earns a basic monthly salary of about VND4.8m (154.56 GBP), making trainers. She would get an additional VND20,000 (64p) per hour of overtime and VND300,000 (9.66 GBP) more as a food stipend. It wasn’t much, she said, considering how exhausting the work was. Her company, which suspended operations during the lockdown, gave her no support, she said.

Instead, she relied on charity food packages. She received VND800,000 (25.76 GBP) from a relief fund, and her landlord helped by halving her rent.

The crisis has underlined the vulnerability of migrant workers’ lives, and the need for better government protection, Tu said. Their jobs are both low-pay and precarious. In the past, foreign-owned companies have been known to simply close down without paying workers’ wages or social insurance benefits.

Access to public services is also tied to a person’s registered address in their home province, which means they’re unable to access key services such as healthcare, childcare or children’s education while working away in the industrial areas. “I think the economic importance of these workers has been undervalued,” she said. “Even though we know Vietnam continues to attract foreign investment based on the attractiveness of low cost and abundant labour supply.”

Factories now face significant labour shortages because so many workers have left. Many are expected to stay home with their families at least until the Lunar New Year holiday.

Gold estimates that, of the vendors she works with, 60-70% of workers are back working. “In normal times [they] might be able to manage, but with the increase in demand right now it’s just compounding the issue,” she said. There are also continued, sporadic Covid outbreaks, which lead to temporary shutdowns. On top of this, manufacturers and brands face continued disruption to the supply of raw materials and to shipping.

Mohamed Faiz Nagutha, ASEAN Economist at Bank of America Securities in Singapore, said it is unlikely that production will return to normal levels until the end of the first quarter of 2022. “If you’re talking about actually catching up back to where, in a hypothetical world, production would have been – that will take much longer,” Nagutha added.

The crisis has prompted some retailers to rethink how they balance having an efficient supply chain, and one that is less precarious, said Gold. Others are adopting a more selective approach to buying goods, and doing fewer promotions that require products to be sold in far greater numbers to make the same amount of revenue.

Tu is skeptical of whether the current crisis will bring greater rights for workers, however. Some bosses have offered higher pay to entice workers back to factories, but these perks are likely temporary, she said, adding concrete policy change by local government that’s needed. “I would be cautious about saying the bargaining power of the workers has increased in this particular period of time,” she added.

Instead, she fears the pressures on those workers who remain in the industrial areas could be amplified, as they face the mammoth task of overcoming months of delayed production. The government has proposed lifting the annual overtime cap from 200 hours to 300 hours to boost the sector’s recovery from Covid.

For the moment, many workers have voted with their feet. “When I was stuck inside the rental room, I was really scared of being infected, and that it might affect my health in the long run,” said Lan. “Along with it, my cash running out. I was frightened of the idea that I may not be able to meet my family again.”

* Some names have been changed