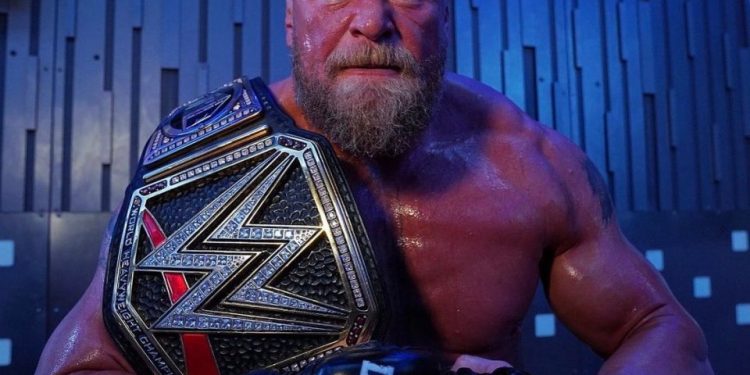 Brock Lesnar has been the resident ass-kicker in WWE for a decade since returning to the company in 2012.

The Beast Incarnate likes to bring his beatings on a part-time basis and has always been viewed as a bad guy as a result.

Brock Lesnar is back on top in WWE

For the first time in years, Lesnar is a good guy and he won the WWE title at Day 1 on Saturday night.

Fans are now relishing how ‘babyface’ Brock is enjoying the moment.

But the former UFC heavyweight champion, 44, revelled in his victory with fans at Day 1.

Check out these pictures and videos of Lesnar in his element:

Lesnar was a last minute addition to the WWE title match because Roman Reigns, who he was to challenge for the Universal title, tested positive for COVID.

According to Dave Meltzer, a long-awaited one-on-one showdown between Lesnar and Bobby Lashley is now in WWE’s immediate plans.

“With Lesnar having won the title, the next step is Lesnar vs. Lashley,” he revealed.

“You could tell, at the end of the show, they teased that glare with Lashley and everything like that, and that was the last scene. The match was booked specifically for that direction.

“Big E was the one that was pinned because if Big E wasn’t pinned, and obviously, you’d want to go with Lesnar and Big E.

“But, the decision, for whatever reason, and the reason is that the people who are making the decisions felt that there was a more marketable match, went with Lesnar and Lashley.

“Then there was the Hurt Lock, which Lesnar was trapped in, with the idea that Lashley proved he could get him in there and probably beat him, but Big E made the save there.

“They booked spots all to be dominant; all the spots with Lashley and Lesnar were booked for Lashley to look good while Lesnar pulverized everybody else and destroyed everybody else. So that’s the story of where they are going with this.”

According to Bryan Alvarez, Big E was going to retain his WWE title before the addition of Lesnar.

“Going into this show, Big E was coming out the Champion,” Alvarez said. “And so Big E losing the title was a direct result of Roman getting COVID and having to scramble to come up with a new idea.”

Alvarez went on to say he’s been told WWE are planning to do a champion versus champion match at WrestleMania between Lesnar and Reigns.