Better use of groundwater could transform Africa, research says 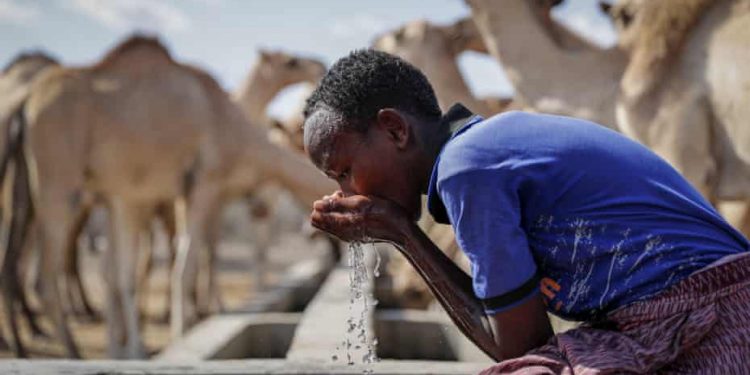 Groundwater resources in sub-Saharan Africa are enough to transform agriculture in the region and provide people with adequate safe water for their drinking and hygiene needs, if the resource can be better managed, researchers have said.

Groundwater – found underground in aquifers, rocks and soils – makes up about 99% of all liquid freshwater on earth, and is abundant in much of Africa, but a lack of investment has left it untapped or poorly managed, two major studies have found. The reserves could be used for irrigation and to supply clean and safe water, but there is also a danger that if used unsustainably they could be rapidly depleted or polluted.

Tim Wainwright, the chief executive of WaterAid UK, the charity behind one of the reports, said: “Our findings debunk the myth that Africa is running out of water. But the tragedy is that millions of people on the continent still do not have enough clean water to drink. There are vast reserves of water right under people’s feet, many of which are replenished every year by rainfall and other surface water, but they can’t access it because services are chronically underfunded.”

WaterAid, along with the British Geological Society, found that most African countries could survive at least five years of drought, and some more than 50 years, on their groundwater reserves. Their study, entitled Groundwater: the world’s neglected defence against climate change, found that every sub-Saharan African country could supply 130 litres a day of drinking water per capita from groundwater without using more than a quarter of what can be renewed, and most using only about 10%.

Separately, the UN’s annual World Water Development Report also concentrated on groundwater this year. It found that only 3% of farmland in sub-Saharan Africa was equipped for irrigation, and only 5% of that area used groundwater, even though groundwater is often abundant in the region.

Richard Connor, lead author and editor of the UN report for Unesco, said groundwater was not being used in Africa because of a lack of investment in equipment and infrastructure, and a shortage of institutions, trained professionals and knowledge of the resource. Developing expertise in mapping and managing groundwater resources would be essential, he said.

There are also dangers to over-exploiting groundwater. Some groundwater is quickly replenished as rain falls, but there are also aquifers that have lain undisturbed for millennia and even millions of years. This “fossil water” is now within reach of modern pumping methods, and has been effectively mined as such, for instance to build cities in the desert in the Middle East. This cannot last, as the water is not replaceable across human timescales.

Connor pointed to other examples around the world of over-exploitation, in south Asia, parts of the US and Australia, where groundwater has been used unsustainably. In India, for instance, more than 30 years of incentives from government to farmers to extract water, without the development of accompanying governance structures to ensure the water was shared equitably and managed for the long-term, has led to rampant over-use, with groundwater depleted beyond its natural ability to recharge. That has left farmers fighting over a dwindling resource, with falling and increasingly polluted water tables.

Connor said public participation was key, with local people being given rights and responsibilities over their resources, and the knowhow to extract and use groundwater efficiently and sustainably. He said this required investment: “It costs money to do it properly, and it can cost more money to manage sustainably than to mis-manage, in the short term. But the returns from good management are huge. Proper management will allow the resource to be available for generations.”

For African countries, a further danger is that other countries may leap in to take advantage first. The Oakland Institute has published a separate study showing that big agricultural commodity companies from overseas are seeing a major opportunity in Africa. Researchers studied 15 cases of large-scale agricultural projects in 11 African countries, where big companies were given rights to land and water extraction.

The report warned that in many cases, far from seeing benefits from the development, local people were often disadvantaged. “When irrigation infrastructure is established, it benefits private firms for large-scale agriculture, often for export crops, instead of local farmers and communities,” the report says. “People living in arid and semi-arid lands are severely impacted by large-scale irrigation projects that reduce available pastures, and prevent flood recession agriculture, while fences and canals cut through traditional routes of people and livestock.”