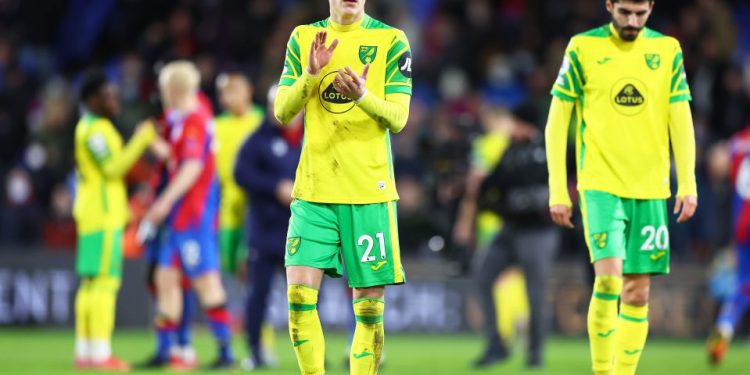 Paul Parker has advised Chelsea midfielder Billy Gilmour to get out of his loan at Norwich, if possible.

The Scotland international moved to Carrow Road on a season-long loan but it’s not gone to plan with Norwich languishing at the bottom of the Premier League.

The situation looks hopeless for Norwich, who have just ten points from 19 Premier League outings this seasonGetty

And it appears the Canaries faithful are turning on Gilmour, with some fans heard chanting ‘f*** off back to Chelsea’ in the stands during their 3-0 defeat at Crystal Palace.

Parker believes the 20-year-old should look to get out as soon as possible for the sake of his development and questioned why he went to Norwich in the first place.

“I didn’t hear it [the chants] but I’m sure Billy would’ve heard it,” Parker told talkSPORT.

“If you’re him and you’re Chelsea you’re wondering what he’s actually gaining from being there. All he’s getting is 90 minutes under his belt.

“He doesn’t need that. Everyone knows how good he is, he’s just at a club which is not him. When you see him playing for Scotland but more when he’s playing for Chelsea you saw how good he was.

“He’s having to do so much in this team. It’s very, very difficult for him. It’s not just about him, there are many players letting this football club down.

“When Gilmour signed [for Norwich] I thought ‘oh, that’s a strange one.’

“Norwich is a lovely club in a great part of the country but when you look at your football career and want to get to that next level, you want to be around the best players you can be. He hasn’t got that at Norwich.

A return to Chelsea may be better for Gilmour’s developmentGetty

“Did he get a choice? If there were choices then the other choices would’ve been better than Norwich.

“It’s not doing him any good playing there, it could be ripping him apart.”

Parker also believes Gilmour would be better off going back to Stamford Bridge, adding that he’d be re-joining a manager in Thomas Tuchel, who appears to be more open to giving young players a a chance more than many of his predecessors were.

He added: “When you see some of the players who are now playing for Chelsea under Tuchel.

“He’s doing something different to most Chelsea managers, he’s using everyone in the squad, the younger players and Billy Gilmour would be out there.”