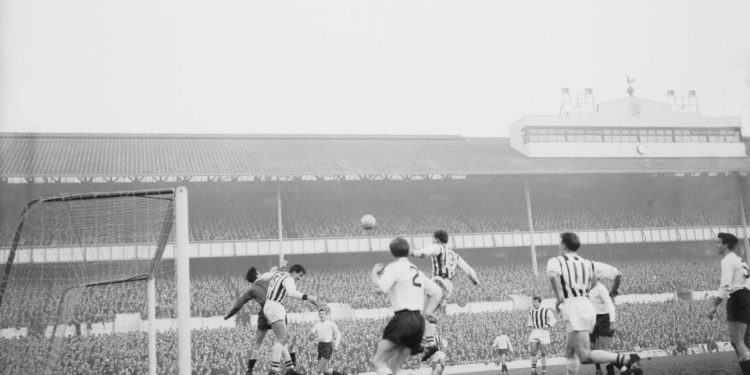 talkSPORT’s commentators would have been lost for words if they were in the commentary box 50 years ago today.

There were an incredible 66 goals scored in the English top flight on December 26, 1963, with players helping themselves in the penalty box.

Maybe all the goalkeepers enjoyed their Christmas a bit too much?

Former Tottenham centre forward Terry Dyson, who played in his side’s 4-4 draw with West Bromwich Albion remarked: “It was a bizarre afternoon of football, without a doubt.”

It’s unlikely there will be anything quite like Boxing Day 1963 again, with Fulham recording their biggest league triumph to date and Ipswich their worst defeat. Even in the Second Division, Man City pumped Scunthorpe 8-1.

But what were the scores on that incredible day? Find out below…

Blackpool 1-5 Chelsea
Dave Durie scored for the home side, but Chelsea were already 4-0 up at Bloomfield Road thanks to Albert Murray, Peter Houseman and two goals from Barry Bridges. Terry Venables added a fifth.

Burnley 6-1 Manchester United
United were four points off the top at the start of the day, but were beaten by four Andy Lochhead goals and two from Willie Morgan. David Herd scored for the visitors.

Fulham 10-1 Ipswich
Alf Ramsey had led Ipswich to the title 18 months earlier, but under Jackie Milburn they were woeful and had conceded 58 times prior to the Boxing Day clash. Graham Leggat scored four, Bobby Howfield netted a hat-trick and there were also goals from Maurice Cook, Bobby Robson and Alan Mullery. Gerry Baker scored the Tractor Boys’ one and they finished the season bottom, shipping 121 goals in the process.

Alan Mullery is pictured with Pele.getty

Leicester 2-0 Everton
Everton were the reigning champions, but were sunk by two Ken Keyworth goals.

Liverpool 6-1 Stoke
Roger Hunt with four as well as strikes from Ian St John and Alf Arrowsmith put Stoke to the sword, whose goal at Anfield came from John Ritchie. The Reds went on to win the First Division.

Liverpool legend Roger Hunt scores his team’s first goal during the European Cup semi-final, first leg against Inter Milan at Anfield in 1965. They won the match 3-1.

Forest 3-3 Sheffield United
A double from Mick Jones and one from Len Allchurch saw United come back from three goals down after Frank Wignall, Geoff Vowden and Ian Storey-Moore put Forest in front.

Sheffield Wednesday 3-0 Bolton
This was a win that helped Wednesday keep pace near the top and they were aided by Mark Pearson and a Colin Dobson brace. At the end of the day they were fourth, five points off leaders Blackburn.

West Brom 4-4 Tottenham
Tottenham began the decade by winning the League and Cup double and in 1963 won the Cup Winners Cup – the first British side to win a European trophy – while they were the previous season’s runners-up. Here, however, they let a 4-2 lead at the Hawthorns slip. Jimmy Greaves scored twice and there were strikes from Cliff Jones and Bobby Smith, but West Brom were rescued by Clive Clarke, Micky Fudge, Don Howe and John Kaye.

West Ham 2-8 Blackburn
Leaders Blackburn showed their class, with Fred Pickering and Andy McEvoy both scoring hat-tricks, while Mike Ferguson, Bryan Douglas scored the others. For the home side Johnny Byrne bagged two.

Wolves 3-3 Aston Villa
It was 0-0 at half-time in the Midlands derby until Tony Hateley, Vic Crowe and Dave Poutney scored for Villa, while Terry Wharton and Ray Crawford got Wolves’ goals, with the latter scoring twice.

Clubs had the chance to exact revenge, though, two days later when the fixtures were replayed. Arsenal’s game against Birmingham on the 26th was postponed, but played on the 28 December, while Stoke’s rematch with Liverpool was also called off.