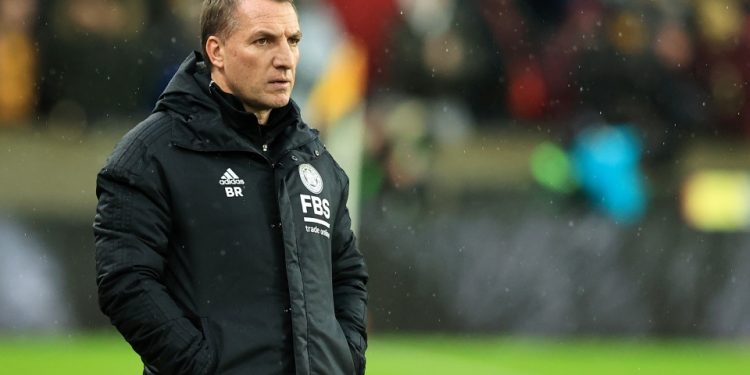 Brendan Rodgers is ‘running out of games’ to save his job at Leicester following their latest defeat at Wolves.

That is according to talkSPORT’s Alex Crook, who has revealed that patience among the Foxes hierarchy was already wearing thin before they succumbed to a fifth match without a win on Sunday.

Goals in either half from Ruben Neves and Daniel Podence saw the Wanderers claim 2-1 victory at a rain-soaked Molineux on Sunday, with Ademola Lookman’s 41st minute equaliser ultimately counting for nothing.

Leicester have been in that race for the top four in the last two seasons but have struggled this time around and this loss makes it five Premier League games without a win.

“Whether you think that’s short-terminism or not, there is a vocal minority who want a change of manager.

“He’s odds on with the bookmakers to be the next manager to leave.

‘How was he allowed to play on?’ – Leeds ace covered in blood after head injury

It’s been a poor season for LeicesterGETTY

“I made a few enquiries earlier this week and was told by one source that he is running out of games.

“His relationship with the sporting director is perhaps not as it should be and that’s another bad defeat away today at Molineux.

“I think it’s going to be an interesting situation to keep an eye on.”

Despite another performance without a win, Rodgers is hopeful a return to form for Leicester is just around the corner.

He said: “The result is a little frustrating because of our performance. We played very, very well. We are very disappointed. They had two shots on goal and scored two goals.

“I have seen us win some games and play nowhere near that level. I can see some fluidity coming back, we were at least worthy of a point. It was a little disappointing not to take anything.

“We are starting to return to our level, you see the progression, the energy in the team, we were a real threat today. Maybe in the final third we lacked the bit of quality needed to break down a five-man defence, but we arrived there numerous times with some good football.

“It is disappointing to not get something, but this game is all about performing and if we can do that we know with players coming back we can get back and challenge again.

“You look at that performance, you see our football – it might be too late for us this season in terms of challenging where we have been in the last couple of years, but we want to finish strongly.”