Calls for action on gender-based violence after Ashling Murphy killing 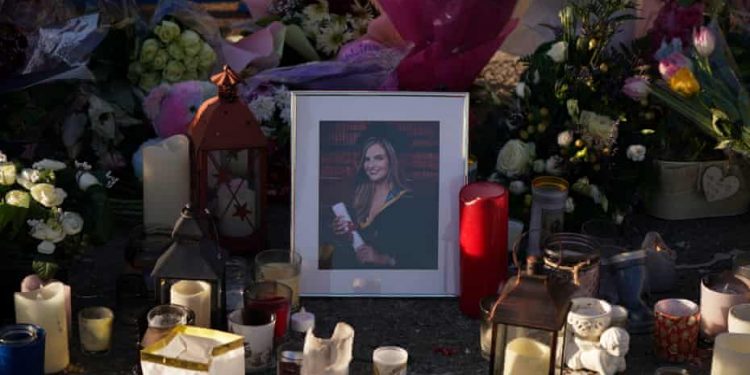 Campaigners have called for the end of the “scattered” approach to gender-based violence in Ireland after the murder of 23-year-old Ashling Murphy.

Irish police are still hunting for the killer of the primary school teacher, who was strangled on a canal path near the town of Tullamore while out jogging on Wednesday afternoon.

The murder has convulsed the nation with an outpouring of anger and shock in Ireland and beyond, with tens of thousands of people attending vigils in Dublin, Cork, Belfast, London and New York over the weekend.

Her funeral will take place on Tuesday. Schools around the country have been asked to observe a minute’s silence by the main teaching unions.

There has been a chorus of calls for more action by the government and an end to “turf wars” between justice, children’s, health and other departments over who is responsible for which part of services for victims of domestic, sexual and gender-based violence.

Over the weekend there were heartbreaking scenes as Ashling’s devastated parents, Kathleen and Raymond, her sister, Amy, brother, Cathal, and boyfriend, Ryan, joined a vigil near the location of the killing.

The Garda Síochána are still waiting to speak to an individual who presented to a Dublin hospital with unexplained injuries, some of which were believed to be self-inflicted and serious.

The minister for justice, Helen McEntee, said a new strategy to tackle domestic, sexual and gender-based violence will be published by March, promising a “zero-tolerance” approach to violence against women.

Mary McDermott, chief executive officer at Safe Ireland, which campaigns for women and children’s safety, said a joined-up approach was long overdue, with “goodwill” needed at the children’s and other departments as they needed to yield control of parts of their portfolio to deliver a centralised ministry.

“Refuge and support services are under [the department of] children and the rest of the responsibility, which we know requires a whole-of-government response, is scattered across the rest of government departments.”

While there have been repeated calls for centralisation since a government taskforce on the issues in 1997, McDermott said it was time for law makers to stop treating “domestic, sexual and gender based violence” as an “amorphous mass”.

“Until we really sit down and stop all the blaming, name it accurately and bring it front and centre into government, with a ministerial responsibility and proper resources, we’re going nowhere,” she said.

She said the problem needed to be treated as a matter of urgency and given the same weight as the climate crisis, with a “high level unit” to tackle the cross-departmental issues.

The sensitivity of the issue of gender violence was highlighted over the weekend when one RTE presenter was warned in a text to her radio show to refrain from making remarks that could be construed as “anti-men”.

McDermott said one of the “most debilitating” things about the campaign for the safety of women was the “false equivalence” that men were also victims of violence by women.

According to the Irish Times, the organisers reported the incident to Zoom and requested information from the platform about the account used by the man.