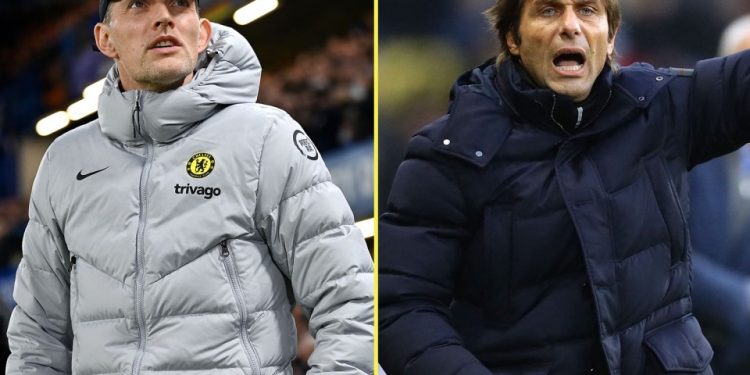 The Belgian was dropped for the Blues’ 2-2 Premier League draw with Liverpool on Sunday after voicing his frustration at his role this season.

But the 28-year-old is said to have held a positive face-to-face meeting with Tuchel after training with his teammates on Monday.

And he now could line-up against his former Inter Milan boss Antonio Conte, who is returning to Stamford Bridge for the first time as Spurs manager.

The Carabao Cup tie is set to take place on Wednesday, January 5 at Stamford Bridge and kick-off is scheduled for 7:45pm.

The match will be live on talkSPORT with our coverage starting at 7pm.

Adrian Durham will be your host while commentary will be provided by Sam Matterface and former England striker Dean Ashton.

Lukaku trained with his Chelsea teammates on MondayGETTY

Kepa Arrizabalaga is set to start for the hosts in goal after Edouard Mendy departed to take part in the Africa Cup of Nations.

Ruben Loftus-Cheek remains a doubt while Reece James, Ben Chilwell, Andreas Christensen and Timo Werner are all expected to miss out.

The club has also just overcome a COVID outbreak that saw them be forced to postpone two Premier League games and Conte revealed that some of his players are at risk of missing the first-leg against Chelsea.

“We are checking a couple of situations about COVID. Yeah, players,” the Italian said in his pre-match press conference.

“We didn’t do this (name them) in the past and we will continue to do this in the same way.

Chelsea v Tottenham: What has been said?

Tuchel has said Lukaku has apologised for his well-publicised interview comments and it’s now time to move on.

The German said: “We have given it time to look calmly back on. He apologised and is back in the squad for today’s training.

“For me, the most important thing was to understand – and clearly understand – it was not intentional. He did not do this intentionally to create this kind of noise in front of a big game.

“Even before, when he seemed to be, in his opinion, ready to play after his injury from the start and we thought he needed to readapt to the intensity a little bit more, there was never the slightest behaviour against the team.

“So, it was the very first time that he felt in this way. It’s very important points to understand and stay calm and understand it’s not that big as maybe people want it to be.

“It’s also not small, but it’s small enough to stay calm, accept an apology and to move on forward.”

Meanwhile, Conte will return to Chelsea for the first time since leaving the club in the summer of 2018.

He enjoyed great success there but he had an acrimonious departure with a fiercely fought court case over compensation payments coming afterwards.

But there’s no bad blood now as far as Conte is concerned.

“For me for sure it will be great to come back to Stamford Bridge [for the] first time after I left Chelsea as manager,” he said.

“What I can say is that I spent two amazing seasons, created a lot of friendships in the club.”