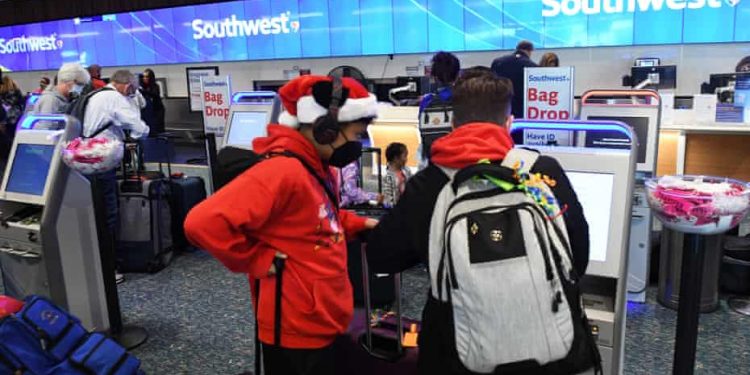 Passengers travelling home for Christmas have been hit with disruption worldwide after airline companies cancelled more than 2,000 flights on Friday, according to a flight tracking website.

The surge of Christmas Eve cancellations came as the rapidly spreading Omicron coronavirus variant meant carriers were unable to staff their flights.

At time of writing, the flight tracking firm FlightAware said 2,031 Christmas Eve flights had been cancelled globally, including 448 in the US.

“The nationwide spike in Omicron cases this week has had a direct impact on our flight crews and the people who run our operation. As a result, we’ve unfortunately had to cancel some flights and are notifying impacted customers in advance of them coming to the airport,” United said on Thursday.

Meanwhile, Delta said it had “exhausted all options and resources – including rerouting and substitutions of aircraft and crews to cover scheduled flying – before cancelling around 90 flights for Friday”.

The airline blamed the impact of the Omicron variant and weather conditions for the cancellations.

In response to the pre-holiday chaos, airlines have called for the relaxation of quarantine rules for vaccinated staff.

Delta’s chief executive, Ed Bastian, has asked the head of the US Centers for Disease Control and Prevention (CDC) to reduce the self-isolation period for vaccinated people experiencing breakthrough infections from 10 to five days. Airlines for America and JetBlue seconded the request.

Airlines’ social media feeds have been filled with frustrated passengers asking for assistance after a spate of cancellations on Christmas Eve due to the rapidly spreading Omicron variant.

“@Delta really?! You cancel my Christmas Eve flight at 12:30am?? I got up at 2am to get to the airport with my baby and husband and don’t see the cancellation till I’m at the airport to get my bags checked,” one passenger tweeted at the airline on Friday – one of several similar messages directed at carriers that have had to call off flights.