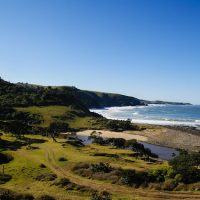 “Shell will be forced to halt oil exploration in vital whale breeding grounds along South Africa’s eastern coastline after a local court blocked the controversial project,” reports the Guardian.

Lawyers for the grassroots campaigners fighting to protect the Wild Coast showed the colossal fossil failed to meaningfully consult the communities that would be affected by seismic testing, especially “Indigenous groups living near the coast which hold customary rights to undertake small-scale fishing in the area, as well as a cultural and spiritual connection to the ocean.”

The case echoes an ultimately successful Supreme Court appeal by the Inuit of Clyde River, Nunavut to ban seismic testing by a Norwegian oil consortium on the grounds that the shatteringly loud sound waves involved would do serious harm to marine creatures living anywhere near where the tests are conducted. The Canadian court likewise cited the absence of meaningful consultation with resident Indigenous peoples in its judgement.

Wilmien Wicomb, an attorney at the Legal Resources Centre, told The Guardian the Wild Coast case carries “huge significance”, showing that “no matter how big a company is, it ignores local communities at its peril.”

The victory followed fairly swiftly on “an unsuccessful 11th-hour legal challenge by environmental groups earlier this month to block Shell’s plans on the grounds that it could cause irreparable damage to the environment.”

Shell said it respects the court’s judgement and will cease exploration while it reviews the ruling.

US Emissions Surged in 2021: Here’s Why in Six Charts