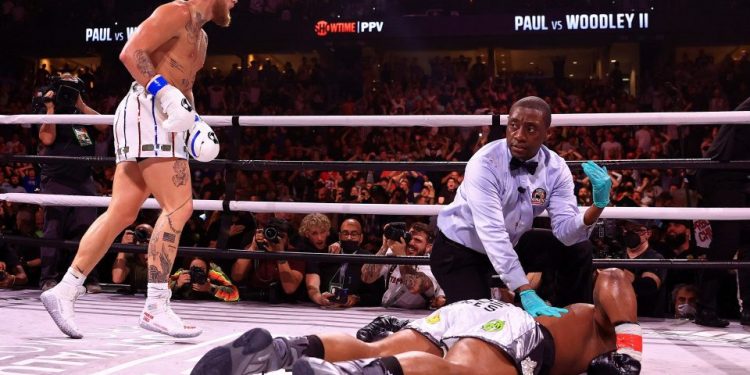 You might be surprised to learn that Daniel Cormier isn’t a fan of what Jake Paul is doing to MMA fighters.

The YouTuber turned professional boxer knocked Tyron Woodley out cold in their rematch.

After plenty of bitterness over the course of their rivalry, the pair ended up showing plenty of respect after the fight.

Woodley even encouraged fans to send him memes of him on the canvas after taking Paul’s dynamite right hand and for Cormier, that was a bad sign.

“T-Wood’s my boy, I love T-Wood,” Cormier told ESPN. “That was not good, that’s a bad look. And you know what’s worse? The after.

“I don’t know what T-Wood’s doing on social media. He posts the knockout, he makes a contest about it – It’s like Jake Paul is beating these dudes so bad that they start to make fun of themselves.”

Woodley and Paul battled a pretty mundane contest until the knockout punch but Cormier at least appreciated how Paul set up that opening.

Woodley will be out for two months’ at a minimumAFP

“This is the problem with those guys going to fight Jake Paul because look at what happens,” Cormier said.

“Bro, that right hand that he hit Tyron with, it was actually pretty slick because what he did was he feinted at him. He feinted at T-Wood, T-Wood dropped his hand, so that when he threw the second one and the hand dropped it wasn’t an overhand right, it was a hook.

“That’s how you know he got the brother, because T-Wood said, ‘He got me with the overhand right.’ He don’t even know what got him.”

Paul has now defeated two former UFC fighters in Ben Askren and Woodley and the 24-year-old has called out UFC boss Dana White and pleaded with him to let him face the likes of Jorge Masvidal, Nate Diaz and even Conor McGregor.

Paul is ready to take on the world, but is still annoyed with Tommy FuryGetty

Cormier, who had his own problems with Paul at UFC 261 earlier this year, doesn’t like what happens to guys who lose to Paul.

“My biggest issue is these guys go in there to fight this dude, they lose to him,” Cormier said.

“Ben Askren was immediately almost making fun of himself. It’s almost like you’re so embarrassed that you lost to the Disney kid or the YouTuber that you start to almost become self-depreciating [sic]. It’s bad. It’s bad what’s happening to these dudes.

“What’s unfortunate is I’m like, ‘Tyron got him this time. Tyron got him.’ You told me, ‘No way Tyron gonna beat this dude, he gonna lose.’ I’m like, ‘You’re crazy.’ This guy goes and knocks T-Wood out, man, it was bad.”

Paul and Daniel Cormier had a confrontation at UFC 261Getty

Macron declares his Covid strategy is to ‘piss off’ the unvaccinated

How thinking digital can help trade recover from Covid-19