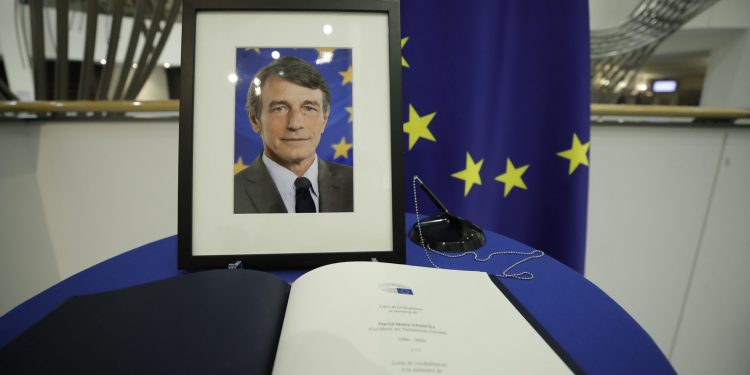 As they mourned the death of their president, David Sassoli, members of the European Parliament recalled with fondness a leader who won friends across the political spectrum with charm and a human touch.

In an age of political polarization, the Italian social democrat was something of a throwback — a gentlemanly compromise-seeker.

Sassoli, who died on Tuesday at the age of 65, also sought to champion his own country and its language, speaking in public almost exclusively in Italian even as other Continential European politicians increasingly resort to English.

Friends and colleagues recalled Sassoli greeting everyone he bumped into — senior officials, MEPs, Parliament staff, cleaning ladies — with an informal “Come stai?” (“How are you?”)

They also recalled the former journalist’s determination to keep Parliament operating when confronted with a challenge encountered by none of his predecessors — a Continent-wide lockdown imposed in the face of a deadly pandemic.

Some stressed his strong Catholic roots and commitment to social justice, demonstrated by his decision to open up Parliament buildings to vulnerable women and to help homeless people during the pandemic, and to the rights of refugees.

But most of all they spoke of Sassoli’s personal qualities. He may not have been a political heavyweight — Sassoli was, as he freely admitted, an almost accidental choice to be Parliament president — but he left a deep impression on many MEPs.

“I will keep in mind the memory of someone who was the opposite of a political shark,” said Philippe Lamberts, co-leader of the Greens group in the Parliament.

“He was honest, profoundly kind, and concerned about the common good,” said the Belgian, who worked closely with Sassoli in the Conference of Presidents, the key decision-making body of the Parliament’s leaders.

Ryszard Legutko, co-leader of the right-wing European Conservatives and Reformists group, said he was “politically on the opposite side” from Sassoli on many issues but paid tribute to a “charming and extremely polite man.”

“There was never any hostility from him and at least Sassoli was trying to create a certain atmosphere of cooperation and understanding,” said Legutko, of Poland’s Law and Justice party, which is often at loggerheads with the EU’s institutions.

Some MEPs and Parliament officials gathered in silence outside the legislature’s main building in Brussels on Tuesday to mourn Sassoli. EU flags on Parliament buildings were lowered to half-mast.

The Parliament announced that Sassoli would be honored on Monday at its next plenary session in Strasbourg. His death came shortly before he was due to complete his two-and-a-half-year term as the institution’s president.

Sassoli’s term was marked above all by the coronavirus. Even more than for other democratic institutions, the pandemic posed huge challenges for the European Parliament as the legislature brings together lawmakers and staff from across the many national boundaries and relies heavily on services such as multilingual interpreting.

In the early days of the pandemic, Sassoli instructed all MEPs to stop traveling and stay in Brussels. For a time, no political gatherings were held in the Parliament. And the body’s regular sessions in Strasbourg came to a halt.

But Sassoli sought to keep the Parliament functioning.

“From March to May 2020, he stayed on his own in a small apartment in Brussels without seeing his family,” a Parliament official said. “Another president could have gone to his country … He would come to the office every day.”

Sassoli was a staunch champion of the EU and was broadly seen as supportive of the agenda of European Commission President Ursula von der Leyen — a mix of center-right, center-left and liberal policies.

But he also showed a willingness to speak out against von der Leyen when his home country was bearing the brunt of the pandemic and she spoke dismissively of proposals to create “corona bonds” to help fund economic recovery.

Sassoli and other leading Italian politicians publicly took issue with von der Leyen, forcing her into a weekend backtrack.

Despite that disagreement, officials said Sassoli and von der Leyen developed a close and trusting working relationship. In a video statement on Tuesday, a visibly upset von der Leyen described him as a “dear friend.”

“David Sassoli was a man of deep faith and strong convictions. Everyone loved his smile and his kindness, yet he knew how to fight for what he believed in,” the German Christian Democrat said.

Officials said Sassoli had the ability to keep his cool even when under attack. One diplomat recalled him standing his ground when then-German Chancellor Angela Merkel blasted the Parliament’s call for a bigger EU budget and recovery fund.

“Merkel told him it was completely unrealistic … she lashed out against him and his expression did not change,” the diplomat said. “He set his conditions without hesitations.”

The Parliament did not get its wish list but did extract some concessions from EU leaders.

Sassoli also took a personal stand on refugees, once again swimming against the political tide as Europe takes an increasingly hard line on migration.

“I believe it is our duty first of all to save lives,” he said in June after opening a conference on migration and asylum in Europe. “It is no longer acceptable to leave this responsibility only to NGOs, which perform a substitute function in the Mediterranean.”

On social policy, colleagues spoke of a politician committed to helping the most vulnerable in society. Brando Benifei, a fellow Italian center-left MEP, said Sassoli had given him strong backing as the Parliament negotiated with EU governments on the European Social Fund Plus, a program to fight poverty and increase employment opportunities.

“We stood firm on two points that David cared about … He was supportive and encouraged me to have firm positions,” Benifei said.

He said Sassoli had “real humanity, never taking himself too seriously but with a profound sense of duty.”

For his part, Sassoli’s spokesman, Roberto Cuillo, summed up the approach of his boss in a few words: “David made kindness and good manners essential ingredients of politics.”