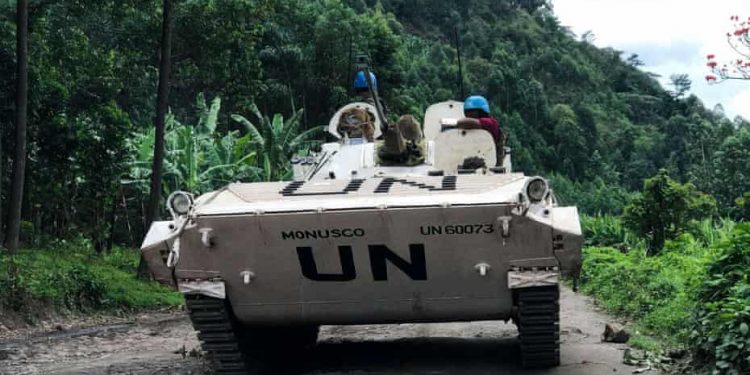 Eight UN peacekeepers – six Pakistanis, a Russian and a Serb – were killed on Tuesday when a Puma helicopter crashed in the troubled eastern Democratic Republic of Congo (DRC), UN and Pakistani officials said.

“While undertaking a reconnaissance mission in Congo, 1 Puma Helicopter crashed. Exact cause of crash is yet to be ascertained,” the Pakistani military’s media wing said. It added that six Pakistani troops were among those killed.

A spokesperson for the UN secretary-general, António Guterres, in New York confirmed the crash and gave the nationality of all eight victims.

Congolese military authorities in North Kivu said the M23 had “shot down” the aircraft, a claim not confirmed by other sources.

The UN mission in the DRC said earlier in a tweet that it had “lost contact” with one of its helicopters, which was on a reconnaissance mission in the Rutshuru region of North Kivu province where Congolese forces have been battling M23 rebels.

The DRC army has explicitly accused Rwanda of supporting an armed rebellion in the east of the vast country, charges Kigali denied on Tuesday.

After months of suspicion and decades of mistrust between DRC and its neighbour Rwanda, a spokesperson for the North Kivu governor on Monday issued a statement saying the M23 “backed by the Rwanda Defence Force (RDF) carried out incursions and attacked positions” of the army the previous night.

The attacks took place at Tchanzu and Runyoni, in the Rutshuru area, Gen Sylvain Ekenge said. To support his accusations, he added two Rwandan soldiers had been arrested during Monday’s attacks, identifying a warrant officer and a private. The two alleged soldiers, dressed in civilian clothes, were standing next to him in footage shown on Congolese television.

The DRC communications minister and government spokesperson, Patrick Muyaya, said on Monday night that, after the army accusations, the foreign ministry would “invite Rwanda’s ambassador so that he comes to give us some explanations”.

The ambassador, Vincent Karega, denied the accusation of Rwandan collusion, saying in a tweet that “Rwanda does not support the M23 politically or militarily”.

The governor of Rwanda’s western province, Francois Habitegeko, also hit back on Twitter. “We would like to categorically refute the baseless accusations and state that RDF is not by any means involved in the belligerent activities,” in DRC, he wrote.

He added that the two men displayed on Congolese television had been arrested “more than a month ago” and were not the soldiers named.

M23 spokesperson Willy Ngoma, in a video message, said the movement was strictly Congolese and did not receive “any assistance … from any neighbouring country”.

Sources in civil society groups in the region said fighting resumed Tuesday morning between government troops and the rebels from M23, also known as the Congolese Revolutionary Army.

M23 emerged from an ethnic Tutsi Congolese rebellion that Rwanda and Uganda had supported in the border province plagued by myriad armed groups over the last 25 years. M23 was defeated by the army in 2013 but has resurfaced since November and has been accused of staging several raids on military strongholds around Rutshuru.

The movement claimed the authorities in the capital, Kinshasa, have failed to respect commitments undertaken to ease the demobilisation and integration of its combatants.

Goma resident Kennedy Bahati, 32, said he and everyone in the region was scared and “tired of war”.

Since Rwandan Hutus accused of slaughtering Tutsis during the 1994 genocide moved into the DRC, Kigali has been regularly accused of incursions into Congolese territory and of backing armed rebels in the east.

Ties improved with the 2019 arrival in power of President Felix Tshisekedi, who has met his Rwandan counterpart Paul Kagame several times.

However, M23’s re-emergence has renewed tensions. The group put out a statement at the weekend saying army operations “against (its) combatants probably show the definitive choice of the Republic’s government to fight it out with M23”.

The provinces of North Kivu and Ituri were placed under a state of siege in May with local authorities replaced by army officers and police but violence has continued unabated.