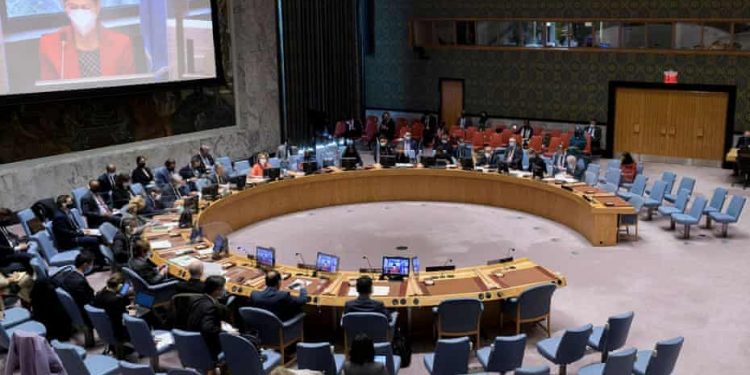 Five of the world’s most powerful nations have agreed that “a nuclear war cannot be won and must never be fought” in a rare joint pledge to reduce the risk of such a conflict ever starting.

The pledge was signed by the US, Russia, China, the UK and France, the five nuclear weapons states recognised by the 1968 Nuclear Non-Proliferation Treaty (NPT) who are also the five permanent members of the UN security council. They are known as the P5 or the N5.

Such a common statement on a major issue of global security has become a rarity at a time of increasing friction between Russia, China and the west. With Moscow threatening to invade Ukraine and China signaling its readiness to use military force against Taiwan, the joint statement represents a renewed commitment to prevent any confrontation turning into a nuclear catastrophe.

A senior US state department official said the wording of the statement had been hammered out at P5 meetings over several months, despite the high-tension environment.

“At the base level to be able to say that this is how we think about these risks, and this is an acknowledgement that it is something that we want to avoid, particularly during a difficult time, I think is noteworthy,” the official said.

The release of the statement had been timed to coincide with the five-yearly review conference of the NPT, but that conference has been postponed amid the spread of the Omicron variant of Covid-19, and disagreements on whether the session could be held virtually.

“We affirm that a nuclear war cannot be won and must never be fought,” the statement said, echoing a joint declaration by Ronald Reagan and Mikhail Gorbachev at a 1985 summit in Geneva.

The NPT was a bargain between states without nuclear weapons, who pledged not to acquire them, and the five nuclear-armed states, which promised to disarm. The review conference, originally planned for 2020, was expected to be contentious as a result of the stalling of momentum towards disarmament and the moves made by the five weapons states to modernise their arsenals.

Four other countries with nuclear weapons, not recognised under NPT: Israel, India, Pakistan and North Korea – have also shown no signs of reducing their stockpiles.

Meanwhile, the breakdown of the 2015 nuclear agreement with Iran and the deadlock so far in attempts to salvage it, have raised the risks of nuclear proliferation, particularly in the Middle East.

Monday’s joint statement was aimed at improving the atmosphere at the NPT review conference. Joe Biden and Vladimir Putin had reaffirmed the Gorbachev-Reagan declaration at a summit in June, and the move was welcomed by China.

It took several months of negotiation over the wording of the declaration before all five powers were ready to agree. France in particular had concerns that such a statement would undermine the deterrent effect of its arsenal.

“France has a nuclear doctrine reserving the right of a pre-strategic use of a nuclear weapon to warn off the aggressor or even to a state sponsor of terrorism”, said Oliver Meier, senior researcher at the Institute for Peace Research and Security Policy.

“This is a way, you could argue, of winning a nuclear war – with a limited use of nuclear weapons to end a conflict.”

Meier said the UK’s reservations were not so clearly expressed but he believed them to be similar.

A line in the joint statement saying that “nuclear weapons – for as long as they continue to exist – should serve defensive purposes, deter aggression, and prevent war,” were added to address French concerns.

The five nuclear weapons powers also stated that the “reduction of strategic risks”, making sure global tensions never lead to nuclear conflict, was one of their “foremost responsibilities”.

“We underline our desire to work with all states to create a security environment more conducive to progress on disarmament,” the statement said.

A senior US official said: “This is a substance-heavy document that goes beyond just the reaffirmation of the idea that a nuclear war cannot be not be won and should never be fought. There is additional content that is reflective of a good and substantive and constructive conversation about how to reduce nuclear threats and eventually eliminate them.”

“Given the security environment, I’m pretty shocked that the P5 could agree to this much,’ Heather Williams, a senior lecturer in defence studies at King’s College London, said.

Williams and other nuclear experts have urged the nuclear weapons powers to improve their channels of crisis communications as one of the ways of reducing risks of an unplanned clash escalating into nuclear conflict. She said she hoped discussions on such risk reduction would continue despite the postponement of the NPT review conference.

Arms control advocates widely welcomed the declaration but called for it to be backed up by a return to disarmament.

“With nine nuclear arsenals currently being enhanced, and Covid problems besetting nuclear-armed submarines and facilities, this statement from five of the nuclear-armed leaders is welcomed, but does not go far enough,” said Rebecca Johnson, the vice president of the Campaign for Nuclear Disarmament, and the first president of the International Campaign to Abolish Nuclear Weapons.

“Of course leaders need to avoid military confrontations, increase mutual understanding and recognise that nuclear war cannot be won and must not be fought, but these words are nothing without concrete disarmament and diplomatic actions to eliminate nuclear arsenals and dangers. As long as nuclear weapons continue to be advertised and wielded by some, we are all put at risk of nuclear war.”

EU must have ‘frank, exacting’ dialogue with Russia, Macron says