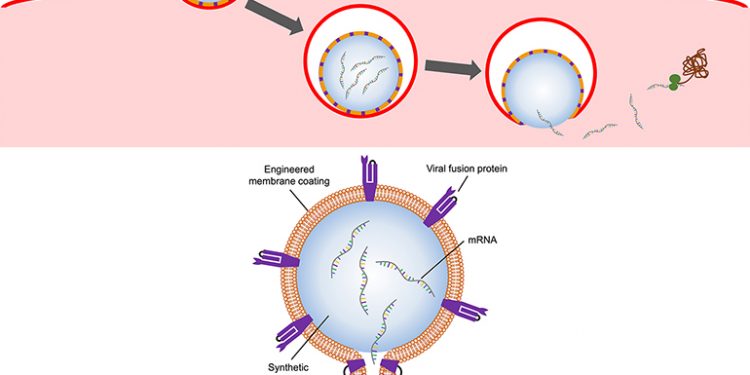 Researchers at the University of California San Diego developed a new delivery technique for mRNA. The method involves flu virus-inspired nanoparticles that can escape endosomes, the acidic vesicles that engulf and destroy materials that attempt to enter cells. The nanoparticles contain a protein receptor that allows them to unlock the endosomes and release the mRNA into the interior of cells. The technology could allow for more efficient and effective mRNA therapies.

With the COVID-19 vaccine program, mRNA is enjoying a moment in the limelight, as it acts as the powerhouse behind some of the most effective COVID-19 vaccines. This nucleic acid provides some of the capabilities of genetic therapies without many of the complications, due to its short duration of expression and its direct translation into protein without affecting the rest of the genetic material in a cell.

Once thought to be too fragile for clinical use, mRNA has proven to be an effective therapeutic, but getting it into cells is still a challenge. A common hurdle for nanotherapeutics is endosomal destruction, whereby the therapeutic never escapes the endosome which covers it on entry through the cell membrane, and is instead destroyed by the acidic environment within. For such nanotechnologies, escaping the endosome is a prerequisite for biological activity within the cell.

“Current mRNA delivery methods do not have very effective endosomal escape mechanisms, so the amount of mRNA that actually gets released into cells and shows effect is very low,” said Liangfang Zhang, a researcher involved in the study, in a press release. “The majority of them are wasted when they get administered.”

Happily, there is a naturally occurring nanoparticle that is highly adept at endosomal escape and provided the blueprint for this advanced mRNA delivery technology – the influenza virus. Influenza viruses have evolved to be highly skilled at entering cells. They possess a protein receptor on their surface, called hemagglutinin, which allows them to fuse with the endosome and break it open. These researchers used the same protein to maximize mRNA endosomal escape.

They cultured genetically engineered cells that express the hemagglutinin protein on their membrane surface, and then broke the membrane into small pieces so that it could function as a nanoparticle carrier for the mRNA payload. Enhancing endosomal escape in this manner could mean increased efficacy and reduced side-effects for mRNA therapies.

“Achieving efficient endosomal escape would be a game changer for mRNA vaccines and therapies,” said Zhang. “If you can get more mRNA into cells, this means you can take a much lower dose of an mRNA vaccine, and this could reduce side effects while achieving the same efficacy.”

Via: University of California San Diego