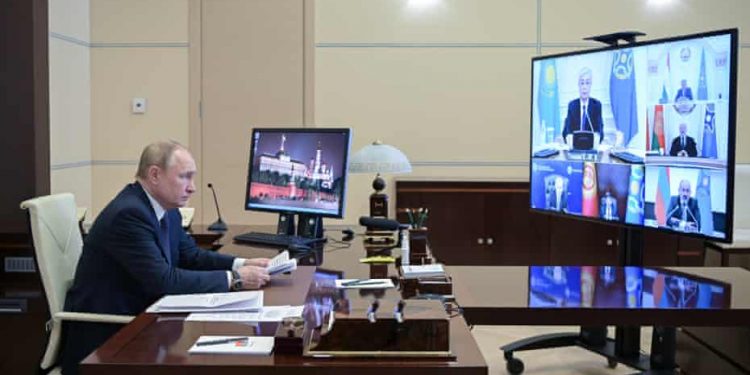 Vladimir Putin has claimed the unrest in Kazakhstan last week that killed at least 164 people was the result of foreign meddling, and said a Russian-led military bloc should take steps to ensure future attempts to interfere in the region failed.

“The events in Kazakhstan are not the first and far from the last attempt to interfere in the internal affairs of our states from the outside,” said the Russian president, who was speaking at a video conference of leaders of the Russian-led Collective Security Treaty Organisation (CSTO), a military alliance that deployed around 2,500 troops to Kazakhstan this week at the request of Kazakhstan’s president, Kassym-Jomart Tokayev.

The CSTO, which also includes Belarus, Kyrgyzstan, Armenia and Tajikistan, has never before deployed troops, and many in Kazakhstan expressed extreme unease at having Russian troops on the ground.

“The measures taken by the CSTO made it clear that we would not let anyone destabilise the situation at our home and implement so-called colour revolution scenarios,” said Putin.

The Russian president believes former Soviet nations should fall into Moscow’s sphere of influence, and has frequently dismissed popular uprisings as “coloured revolutions” organised and financed from abroad. Putin also said the events in Kazakhstan showed the dangers of social media and unrestricted internet use.

Putin’s words come as negotiations in Geneva begin between US and Russian delegations, after Russia demanded a new security deal with Washington and amid fears that Putin is poised to order a further incursion into Ukraine. The fast-moving events in Kazakhstan took the Kremlin and other regional players by surprise.

Protests began over a sharp rise in fuel prices, and quickly spread across the country, but they were taken over by violent groups who stormed government buildings and the airport in Almaty, Kazakhstan’s biggest city. Widespread looting followed.

At the CSTO meeting, Tokayev described the protests against him as a coup, launched by unspecified internal and external forces.

“Under the guise of spontaneous protests, a wave of unrest broke out… It became clear that the main goal was to undermine the constitutional order and to seize power. We are talking about an attempted coup d’état,” he said. He also claimed trained Islamist fighters were involved in the unrest.

Tokayev has repeatedly described violent protesters as “bandits and terrorists” and said on Friday he had given an order to security forces to shoot to kill without warning. Although the country is getting back to normal, Tokayev said the hunt for so-called “terrorists” was continuing.

On Sunday, Kazakhstani authorities said 164 people had died in the violence, including three children. The interior ministry announced on Monday that security forces had detained nearly 8,000 people, a number that is rising sharply each day. It is not clear how many of them will be charged.

Concerns about how transparent the investigation process would be arose when state television aired footage of a bruised man who said he had been paid to travel from neighbouring Kyrgyzstan and take part in violence.

Viewers in Kyrgyzstan quickly identified him as Vikram Ruzakhunov, a well-known jazz musician who frequently toured Kazakhstan. After sustained protest, Ruzakhunov was reportedly released on Monday.

Last week, the powerful head of security services, Karim Masimov, was relieved of his duties and then arrested on suspicion of treason. While there has so far been no evidence presented about foreign backing for the unrest, many have speculated that the protest movement was used by groups inside the Kazakh elite to settle differences.

Some sources have pointed to recent disagreements between Tokayev and figures close to his predecessor, Nursultan Nazarbayev, who ruled the country from independence in 1991 until 2019 and handpicked Tokayev as his successor. Nazarbayev holds the honorific title of leader of the nation, and the country’s capital was renamed Nur-Sultan in his honour in 2019. He was removed by Tokayev as head of the national security council this week, and has still not spoken or appeared in public.