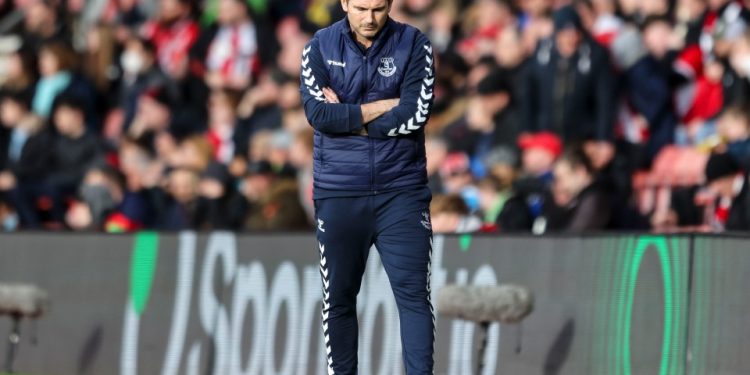 Frank Lampard and Steven Gerrard both endured managerial defeats in the Premier League on Saturday.

Lampard’s Everton were beaten 2-0 at Southampton, while Gerrard’s Aston Villa fell at home to Watford.

If Armstrong was ecstatic to end a drought running from April 4, 2021, Long stepped off the bench to top that sense of relief with his first touch.

Republic of Ireland striker Long’s last Premier League effort for Saints came in a 2-0 win over Aston Villa on February 22, 2020.

Southampton dominated in every area of the field as James Ward-Prowse and Oriol Romeu’s mix of industry and ingenuity buffeted Everton off their stride all afternoon, Kyle Walker-Peters bossed the left flank and Armando Broja was unfortunate to end the day without a goal.

Lampard no doubt thought he had generated lift-off with the 3-0 home thumping of Leeds on February 12 in his third match at the Goodison Park helm.

But the ex-Chelsea boss will need no telling that this loss – and the curiously supine performance – leaves his side still flirting with a relegation battle.

Dennis scored the game’s only goalGetty

The Hornets arrived at Villa Park in the midst of the longest current winless run in the Premier League, having picked up just two points in the 11 matches that followed November’s memorable win against Manchester United.

Hodgson replaced Claudio Ranieri during that bleak run and secured his first victory as Watford manager on Saturday afternoon as Dennis headed home a cross from Ismaila Sarr to seal a 1-0 triumph.

Hodgson got the better of GerrardGetty

Gerrard played under Hodgson with Liverpool and England and was left frustrated by the well-drilled visitors, who held firm during a lively Villa start in which Danny Ings saw penalty appeals against Samir turned down.

But Villa huffed and puffed without seriously threatening Ben Foster’s goal, with opposite number Emiliano Martinez having far more to do.

The Argentina international would only be beaten in the 78th minute as Dennis headed home a fine cross from Sarr – the first goal of the Hodgson era and a winning one at that.

Villa supporters’ frustration was clear, both with referee Robert Jones and their team’s display, at the end of a match that they had started brightly.

Betfair Football Special – Get £50 Free Bets when you bet £10