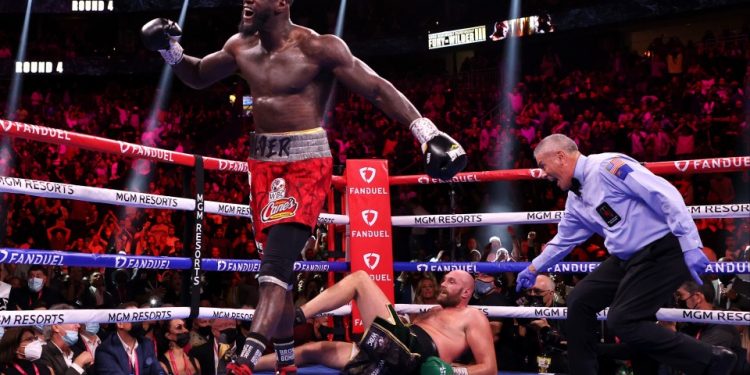 Power: fans love to watch it, any sane boxer hates facing it – but counting down the hardest punchers in every weight class in boxing is no easy task.

There’s fighters like David Lemieux, who have heavy hands but – sorry Dave – not a lot else. And what good is power if you can’t land it? Then there’s rising stars with fantastic KO streaks but can they take it to the top level? Edgar Berlanga scored 16 first-round KOs in succession, yet has gone the distance four times since a slight step up in class.

Class is what either of these punchers possess, however. From a charismatic heavyweight slugger to a monstrous bantamweight banger, these are the 17 most dangerous men in boxing.

Hot competition in boxing’s blockbuster division with Tyson Fury now sitting down on his shots and Anthony Joshua boasting natural power. But Wilder owns unnatural power. The 6ft 6in ‘Bronze Bomber’ has 41 KOs in 45 fights and has stopped every foe he’s faced aside from Fury – who he’s put down four times in three fights. One of the most freakishly hard punchers ever.

Britain has two lanky bangers in Lawrence Okolie and Richard Riakporhe but they’re junior medics compared to Cuba’s ‘KO Doctor’ Dorticos. Mairis Briedis has succeeded Oleksandr Usyk as the no.1 at 200lb, but Dorticos’ right hand remains the division’s biggest threat. The veteran has an 85% knockout ratio and demolished Jesse Bryan in two rounds last time out.

Dorticos has a professional record of 25-2Getty

Dmitry Bivol may be the talk of 175lb after he upset Canelo Alvarez, but it’s his fellow Russian – the fearsome, Zangief-looking Beterbiev – who has a perfect 17-0 (17 KOs) record. That is at least until Beterbiev faces another big puncher, Joe Smith Jr, this weekend in a spicy battle. Brits Anthony Yarde and Josh Buatsi hit hard too, but ‘King Artur’ rules supreme. For now.

Stalking an opponent to land one perfect KO shot did not work for Mexico’s superstar against Bivol at 175lb – but Alvarez is still a destructive finisher. Spectacular stoppages include Sergey Kovalev, James Kirkland and breaking Billy Joe Saunders’ orbital bone with an uppercut. David Benavidez is big and heavy-handed, but Canelo has real one-punch power at 168lb.

‘Triple G’ isn’t quite the blistering puncher he used to be – unable to be so rapid with his shots at age 40 – but he remains a demolitions expert. Golovkin once put together a 23-fight KO streak, is able to knock foes out with either fist and has the arsenal of a master boxer rather than just being a raw slugger. Owns an 84% KO ratio and stopped Ryota Murata in April.

Golovkin’s only career defeat has come to CaneloAFP

Unlike heavyweight, light-heavyweight or bantamweight, 154lb has no clear KO king. But Charlo, the undisputed champ, is maturing into a fine finisher. His 19 KOs in 35 wins is unspectacular, but the American has avenged both of his setbacks (a narrow decision loss and a draw) by knockout, dropping then stopping Brian Castano with a sublime left hook in May.

Switch-hitter Crawford is such a master-boxer that his power isn’t the first thing that leaps out. But it’s there. ‘Bud’ is on a nine-fight KO streak – all world title bouts – and did something Errol Spence couldn’t when he took out Shawn Porter. Hot prospects Jaron Ennis and Vergil Ortiz are terrific punchers, but don’t have Crawford’s proven, elite-level finishing prowess.

Lots of great boxers at the top of 140lb but none are consistent KO finishers – unlike Puerto Rico’s Matias. The southpaw’s 18-1 (18 KOs) record speaks for itself and he avenaged his only loss with a ninth-round stoppage in January. One of those boxers who doesn’t even look like they’re loading up but somehow hurts an opponent with every punch they land.

Matias last fought in January when he beat Petros AnanyanGetty

A power-rich division, from Teo Lopez’s right hand to Ryan Garcia’s left hook, but ‘Tank’ Davis is in the conversation for the hardest puncher, pound-for-pound, in the sport. The sawn-off southpaw has a 93% KO ratio (27-0, 25 KOs) and can put your lights out with just one blow – just ask Leo Santa Cruz or Rolly Romero. The very definition of a knockout specialist.

Davis is 27-0 as a fighterAmanda Westcott/SHOWTIME

Tempting to say Joe Cordina just for that sizzling, one-punch KO which made the Welshman a world champ. But, in a division without an obvious KO leader, Valdez just sneaks top spot. He was outboxed by the no.1 at 130lb, Shakur Stevenson, in April but the hard-hooking Mexican has 23 KOs in 31 fights and memorably sparked out Miguel Berchelt last year.

Supposedly crude Mexican was brought in as an opponent for Josh Warrington in 2021 and pulled off a major shock, bludgeoning the tough Leeds warrior to the canvas and eventually stopping him in nine rounds. Their rematch was cut short by a clash of heads but Lara’s third-round KO of Emilio Sanchez in March showed that – if nothing else – his power is real.

Lara has a record of 24-2-1Mark Robinson/Matchroom

Rising star Steph Fulton is no.1 at 122lb but, for all his skills, is not a KO artist. Nor is Figueroa, who gave Fulton his hardest test, but in a relatively power-light division, the pressure-fighting ‘Heartbreaker’ is ahead of his rivals. Hurt Fulton at times in their bout (Figueroa’s only defeat) and stopped previously unbeaten Luis Nery before that with a thumping body shot.

Figueroa is due to fight Carlos Castro in Texas next monthGetty

‘The Monster’ has had just one opponent last the distance with him since his 10th pro fight: modern great Nonito Donaire. So in their June rematch, Inoue corrected that glitch by crushing Donaire in four minutes. The 5ft 5in Japanese destroyer has a 23-0 (20 KOs) record, can blast rivals to the canvas with either fist and hits harder than any bantamweight. Ever.

Enticing fight with Jesse ‘Bam’ Rodriguez awaits in late June but for now Thai veteran Sor Rungvisai is the proven puncher. Has 43 KOs in 50 wins, astonishing numbers at 115lb, and is the only man to stop the great ‘Chocolatito’ Gonzalez, back in 2017. Gonzalez and Juan Francisco Estrada are the class of this weight class, but Sor Rungvisai is the danger man.

Julio Cesar Martinez can punch, as he showed when pummeling Britain’s Charlie Edwards in 2019 (before the fight was declared a no-contest due to a blow landed with Edwards on the canvas). But Japan’s unbeaten southpaw Nakatani edges into top spot thanks to his six-fight knockout streak. Not a one-shot KO artist, but has the power to overwhelm foes.

Nakatani has not fought since losing to LomachenkoMikey Williams/Top Rank

A total of 11 KOs in a 19-1 record looks unspectacular – but what was spectacular was Kenshiro’s third-round, one-punch KO in March when he avenged his only defeat and won back his 108lb world title. The Japanese boxer-puncher also scored back-to-back fourth-round stoppage wins in 2019 and sneaks ahead of countryman Hiroto Kyoguchi on this list.

All respect to these mighty atoms, but nobody is exactly throwing hand grenades at 105lb. Thammanoon Niyomtrong is nicknamed ‘Little Pacquiao’ but with nine KOs in 23 fights, he doesn’t have ‘Pac Man’ power. Taniguchi, with a 16-3 (11 KOs) record isn’t exactly ‘Tank’ Davis either, but he’s won four in a row by stoppage. Enough for top spot in the smallest weight class.