Myanmar: dozens feared missing after landslide at jade mine 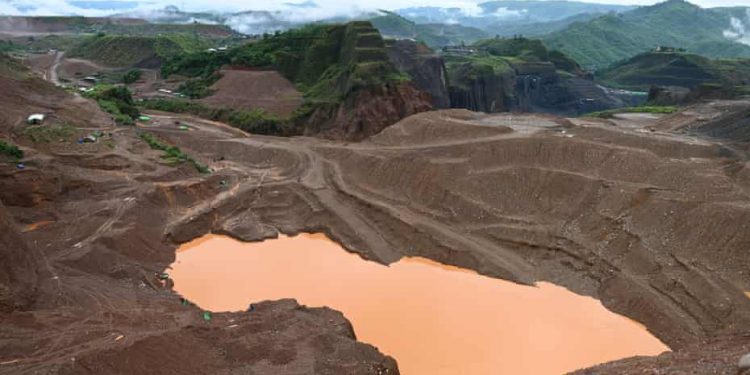 Dozens of people are feared missing after a landslide at a jade mine in northern Myanmar, according to a civil society group and media reports.

The landslide in the Hpakant area of Kachin state happened at around 4am on Wednesday, local time, and there were fears about 80 people had been swept into a lake by mining waste, an official at the Kachin Network Development Foundation, a civil society group, told Reuters.

The Mizzima news portal and Khit Thit media also reported that dozens appeared to be missing in the landslide.

“Authorities arrived at the site around 7am and are conducting the search,” Dashi Naw Lawn, an official at the civil society group, said by telephone, adding that no bodies had been found up to now.

Myanmar’s jade mines are notoriously dangerous. In 2020 more than 160 people were buried alive after a wave of mud swept through a mine in Hpakant, while 54 people died in 2019 when a lake breached its banks.

Conditions are treacherous for the low-paid migrant workers who toil in the mines, particularly during monsoon season. Equipment failures and other accidents are common in the industry, which is controlled by the military elite and private conglomerates.

People from impoverished ethnic communities, who search for scraps left behind by big firms, are often the victims of such disasters. Hpakant is in Kachin state, home to the world’s largest and most valuable jade deposits, but little of the profits trickles down into the country.

In 2014 a report by Global Witness put the value of jade production in Myanmar at about $31bn, nearly half of Myanmar’s GDP that year. The vast majority is smuggled to China, where jade is highly sought-after and associated with royalty, bypassing tax authorities.

The ousted government of Nobel laureate Aung San Suu Kyi had pledged to clean up the industry when it took power in 2016, but activists say little has changed.