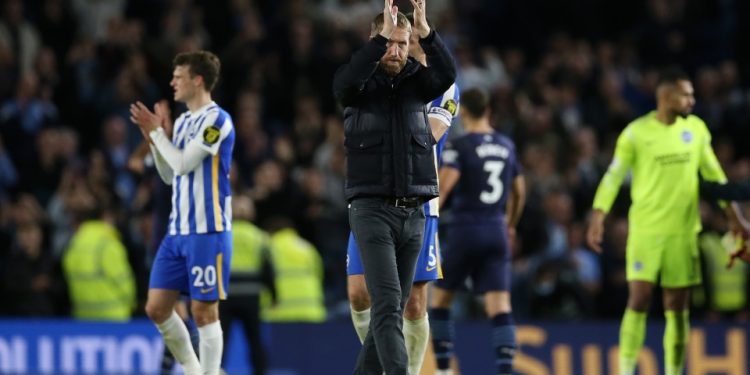 Graham Potter’s modern day management skills would make him an ideal long-term appointment at Manchester United, according to Jamie O’Hara.

The Red Devils are looking to name a permanent manager at the end of the season once Ralf Rangnick’s interim spell comes to an end.

Rangnick will become a consulant at Old Trafford when his tenure ends, having been drafted in to replace the sacked Ole Gunnar Solskjaer in November.

Potter, meanwhile, has established himself as one of the top coaches in the league, impressing many with his style of play in his three seasons on the south coast.

Over the course of his tenure, the 46-year-old has secured some memorable results, including superb draws this season against Liverpool and Chelsea away from home, and a comeback victory against Man City at the end of the 2020/21 season.

And It’s those performances that have led to O’Hara giving his seal of approval to Potter, suggesting he should be the new Red Devils boss.

Asked if he should be targeted by the club, the former Tottenham midfielder told talkSPORT Breakfast: “They should, I don’t know why they wouldn’t.

“Graham Potter would be perfect for Manchester United,” he added.

“He’s that new, modern day manager who knows how to deal with the new style footballer, the modern day footballer.

“Not this old style footballer, which is completely different, and I think he would be perfect for someone like Manchester United.

Asked if Potter would get the time required to turn things around at Old Trafford, he replied: “They gave Ole [Gunnar Solskjaer] time. I think they would, and I think if you’re bringing in someone like Graham Potter, I think you have to because there has to be a process and a change of mentality.”

It also isn’t the first time Potter has received a glowing review, after Liverpool boss Jurgen Klopp praised his counterpart following the 2-2 draw at Anfield in October 2021, in which the Seagulls were two goals down.

“He definitely has all you need [to be a great manager],” Klopp said when asked about the Brighton boss.

“He obviously has a clear idea about football and he is doing a brilliant job. He has brought a clear identity to how he wants his teams to play. He is an innovator and is adventurous.

“He is an absolutely nice fella and his team mirrors his ability. I don’t want to talk the coach of Brighton away to some other clubs, but I think he should not worry about his future.”