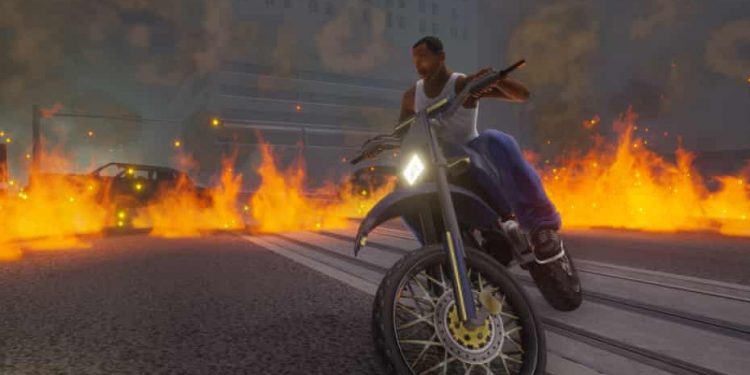 Given the extreme complexity of the art form, remasters of decades-old games can be … variable. But when a publisher applies the label “definitive edition” to newly packaged versions of three landmark open-world crime games, games that loom so large in collective pop-cultural memory, it is reasonable to expect more than unstable rereleases with a graphical update. These versions of Grand Theft Auto III (2001), Vice City (2002) and San Andreas (2004) are in no way definitive. Seeing them like this is more than a disappointment. It is infuriating.

Sign up for Pushing Buttons, our weekly guide to what’s going on in video games.

Graphical glitches, irritating controls and random crashes were, to be fair, all part of gaming in the 00s, before the days of online patches that allowed developers to fix things bit by bit. We put up with it then. But why are we putting up with it now, and paying for it? These remasters feel less stable than the PlayStation 2 originals. Within a couple of hours of starting GTA III – the oldest and least interesting of these three games, an astonishing step forward for gaming in 2001 that feels a little sterile now – I had reached a mission that I couldn’t complete, because the character I was chasing kept falling through the world. Once, my car randomly exploded. I ran through collectibles that I could not pick up.

In San Andreas, the colour balancing is so bad that in order to see what’s going on under fictional California’s sunset skies, I had to turn the contrast down as far as it would go. I could hardly make out characters’ faces, or pick out coloured blips on the map, or see purple graffiti tags on red brick. There has, objectively, been a graphical upgrade to these games, in that they don’t look as foggy and fuzzy as they did – but honestly, I’m not sure I would say that they look better than previous re-releases. The rain effects, particularly, are so ugly that they obscure your view; you’d better hope it’s not raining if your mission involves seeing where you’re going. Where characters were blocky and low-resolution, now they are … weirdly plastic. Their proportions are all off, especially in Vice City.

I don’t want to spend too long itemising the many imperfections to be found in these remasters. Now that the games have been out for nearly a week there are thousands of YouTube videos and Twitter posts cataloguing them. Shop names are, somehow, misspelled. Puns have been ruined by erroneously remastering a nut into a wheel. You can walk through walls or fences only to find invisible walls just beyond. And, embarrassingly for Rockstar, the games were temporarily pulled from sale on PC because they were released with hidden and superfluous notes and files from the original code, reportedly including the abandoned Hot Coffee sex mini-game that caused an industry-shaking legal meltdown in 2005.

Here’s why this stings: Rockstar is notorious for its perfectionism. This is a company that most recently spent the best part of a decade painstakingly recreating the old west for Red Dead Redemption 2, down to horse sweat and grime on gunmen’s revolvers. The level of craft in Grand Theft Auto games has always been exceptional and astonishing. I don’t want to use the word careless, because I can only presume that nobody who worked on these remasters intended them to be substandard. But whatever the reasons behind it, the lack of care and attention to detail evident undermines the entire character of these games.

We have seen, with Bluepoint’s remakes of older PlayStation games such as Demon’s Souls and Shadow of the Colossus, the peak of what can be achieved with a remaster: a full-on overhaul that modernises every aspect. If any other company has the resources to achieve this, it’s surely Rockstar and its parent Take-Two Interactive. Grand Theft Auto has made billions. For me, it is bizarre that more of that money has not been reinvested in Rockstar’s legacy. In the best part of two decades since these games came out, modders have achieved far better than this – and of course, they have all now been shut down by Take-Two’s lawyers.

It is a tribute to the magic of these games – particularly San Andreas, for me – that it’s still possible to sink into them, despite all the technical hitches. Within an hour of starting it up I was right back there in Grove Street with protagonist CJ and his old crew, listening to them screw around and trash-talk each other and occasionally share a truth that hit home, and marvelling at how even with the limited technological tools available at the time, Rockstar managed to create something so strangely believable. The radio stations, despite missing tracks that presumably disappeared because of licensing issues, still transported me right into these games’ satirically ultracapitalist, nihilistic and irreverent headspace. Much of the incidental audio is horribly compressed or unbalanced and sounds awful, but thank God the radio still works.

GTA is a series known for its violence but man, it’s about more than that; it’s a world, it’s a place, it’s a story, about the characters you meet and inhabit and about what you do in the giant, anarchic playground that it gives you. These are huge games; not everything in them is in good taste, not all of the dialogue has aged well. But they are still worth replaying, and worth preserving. Just not in this state.

Grand Theft Auto: The Trilogy – The Definitive Edition is out now; £54.99.