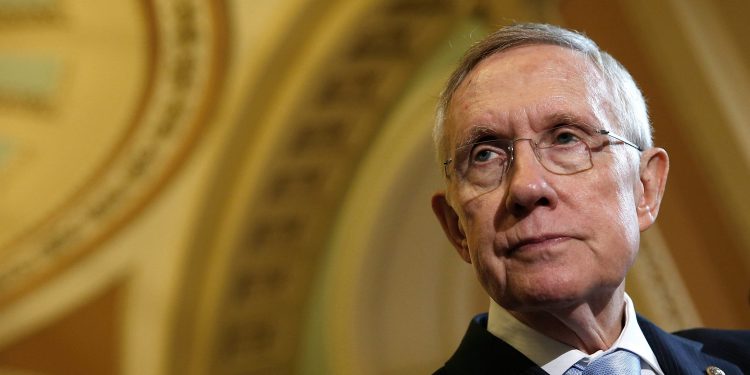 Former Senate Majority Leader Harry Reid, a direct and dogged figure who converted the lessons of a hardscrabble childhood into a leadership role in national Democratic politics, died Tuesday. He was 82.

“I’m sure there are more people capable than I, better looking than me, better educated than me, smarter than me. But I’ve got the job. And I try to do the best I can with the job,” Reid told POLITICO in December 2016, weeks before retiring from the Senate.

A former boxer who developed a rough-and-tumble approach to politics, the Nevada Democrat served five terms in the U.S. Senate and would be a particularly pivotal figure on Capitol Hill in two administrations, as an opposition figure pushing and prodding President George W. Bush and then as the Senate Majority Leader working to help President Barack Obama realize his agenda. Under his watch, Obama’s Affordable Care Act made it through a difficult legislative obstacle course and became law.

“He’s got that curmudgeonly charm that is hard to replace,” said Obama in March 2015.

Reid, who was the longest-serving senator in Nevada‘s history, had been battling pancreatic cancer. His wife, Landra Reid, released a statement Tuesday night, calling her husband a “devout family man and deeply loyal friend.” They were married for 62 years.

President Joe Biden on Tuesday paid tribute to “a great American” and a “dear friend.”

“If Harry said he would do something, he did it. If he gave you his word, you could bank on it. That’s how he got things done for the good of the country for decades,” Biden said in a statement.

Reid was a “giant,” Nevada Gov. Steve Sisolak said in a statement. “Perhaps what I appreciate most about Senator Reid’s legacy is he never forgot who he was or where he came from,” the Democratic governor said.

Harry Mason Reid was born in a town he would characterize in his autobiography as “a flyspeck on the map” and “a boomtown gone bust.”

“I come from a mining town,” he wrote with co-author Mark Warren in “The Good Fight: Hard Lessons from Searchlight to Washington.“ “But by the time I came along — December 2, 1939 — the leading industry of my hometown of Searchlight, Nevada, was no longer mining. It was prostitution.”

Reid’s father was a miner and his mother a laundress. Reid later wrote they had “zero” religion at home, but there was one figure his parents revered, President Franklin Delano Roosevelt. In a town of “hard rocks and inhospitable soil,” their home was built from railroad slats and had no hot water or indoor plumbing. At age 58, his father killed himself.

To attend high school, Harry had to go 45 miles to Henderson, where he was elected student body president, took up boxing, and met Landra Gould, who would become his wife in 1959.

Boxing would shape his outlook on life. “In a fight, you have nobody to help you,” he told Kevin Iole when selected to the Nevada Boxing Hall of Fame in 2018, adding: “It’s you and that guy across the ring.“

From Henderson, he went on to Southern Utah University, Utah State, and — since Nevada had no law school — George Washington University. His first stint in Washington, D.C., led to a job with the Capitol Police. “I would go to law school at GWU full-time and work full-time in uniform at the Capitol on the 3-to-11 shift,” he wrote in “The Good Fight.” He recalled feeling “pretty invisible.”

Reid returned to Nevada after law school, and was elected to the state Assembly at the age of 28. He never lacked for ambition; in 1974, he ran for the U.S. Senate but lost by 624 votes to Paul Laxalt.

In 1977, Gov. Mike O’Callaghan, Reid‘s old mentor and boxing coach, appointed him to lead the Nevada Gaming Commission, a job that required him to surrender all naivete he had about the state’s mob-ridden casinos. It was, Reid later wrote, “an intense, surreal time when it sometimes felt as if I’d wandered into some kind of terrible funhouse.” In 1981, a bomb was found attached to his wife’s car.

After his four-year term expired, he took another shot at D.C. and this time he won, capturing a House seat in 1982. At the end of his second House term, when Laxalt retired, Reid captured the Senate seat he had sought 12 years before.

He cultivated a reputation for gruff talk. “I speak bluntly,” Reid wrote in 2008. “Sometimes I can be impulsive. I believe something to be right, and I do it. And then I don’t worry about it. This has not necessarily served me well, but it is who I am. I can be no one else”

Years later, Nevada political journalist Jon Ralston looked at that 1986 campaign, marveling at how it had launched the Senate career of a man he called “a Machiavelli of malaprops.” Reid was, he said, “a thoroughly unprepossessing man and manifestly terrible candidate who nonetheless achieved unlikely campaign victories and went on to reach the pinnacle of congressional power.

In the Senate, Reid established himself as strongly partisan, a tough battler on Nevada and Western land management issues, and a liberal with some conservative leanings (such as on the issue of abortion). He sometimes came under fire on ethics issues, particularly in his fondness for Nevada interests, including the casino industry.

Reid also rapidly developed a reputation for direct insults, as when he challenged Ross Perot in a 1993 Senate hearing, not long after Perot had drawn almost 20 percent of the vote in the presidential election. “I think you should start checking your facts a little more, and stop listening to the applause so much,“ Reid told him.

Reid became part of the Democratic leadership in 1995, as co-chair of the Senate Democratic Policy Committee, then moved up to become his party’s whip in 1999. In November 2004, Reid watched in shock as presidential candidate John Kerry and Senate Minority Leader Tom Daschle were defeated — and instantly followed that by gathering the support he needed to become his party’s leader in Washington.

“By the turn of the millennium, Reid’s organization was formidable,” Ralston wrote in 2013. “He brought in talented Democratic operatives from around the country, as he grew more partisan, too, leaving behind any pretense that he was ‘independent like Nevada.‘ As he moved up in the Democratic hierarchy, Reid had to fly the partisan flag more often.”

Reid’s first big test was on President George W. Bush’s proposal to privatize Social Security, on which he led Democratic opposition that helped to ultimately doom the legislation. “We are not going to let Wall Street hijack Social Security. It won’t happen,“ he told NBC‘s Tim Russert in 2004.

Reid followed that up with a public pronouncement that the war was lost, something that Bush would later characterize as “one of the most irresponsible acts I witnessed in my eight years in Washington.” Bush and Reid did not often find themselves on the same side, though Reid was credited In October 2008 with skillfully rescuing a bailout package that had gone down to defeat in the House.

When one of the junior members of his caucus was elected to succeed Bush, Reid became one of the strongest advocates for Barack Obama’s initiatives, including his efforts to shepherd Obama’s 2009 stimulus package and pass what came to be known as Obamacare. It wasn’t always easy, as Reid had spoken skeptically of Obama during the 2008 campaign, and, after he was elected, Obama kept a certain distance from Congress.

“Reid handled so much of the care and feeding of the caucus,” wrote Jonathan Alter in “The Center Holds: Obama and His Enemies,” “that Obama spoke even to Democratic senators he genuinely liked no more than than two or three times a year.”

For his part, Obama praised Reid’s leadership in the Senate. “Harry has the toughest job in Washington,” Obama told the New York Times in 2010. “He’s done as good a job as anybody could have done. He just grinds it out.”

Obama on Tuesday shared a letter he wrote to Reid toward the end of his life. Landra had asked Obama and others to write letters she could read to her husband.

“As different as we are, I think we both saw something of ourselves in each other — a couple of outsiders who had defied the odds and knew how to take a punch and cared about the little guy. And you know what, we made for a pretty good team,” Obama wrote. “The world is better cause of what you’ve done. Not bad for a skinny, poor kid from Searchlight.”

“We disagreed on many things, sometimes famously. But we were always honest with each other. In the years after we left public service, that honesty became a bond. Harry was a fighter until the end. RIP, my friend,” he said in a statement.

“I never doubted that Harry was always doing what he earnestly, deeply felt was right for Nevada and our country,” McConnell said in a statement.

Senate Majority Leader Chuck Schumer called Reid “one of the most amazing individuals I have ever met.”

“He was tough-as-nails strong, but caring and compassionate, and always went out of his way quietly to help people who needed help,” Schumer said in a statement. “He was my leader, my mentor, one of my dearest friends.”

Much maligned by tea party Republicans, Reid was the top Republican target in 2010. He had faced a tough challenge in 1998 from John Ensign, retaining his seat by a mere 234 votes. Reid got a boost when former state Assemblywoman Sharron Angle won the 2010 GOP primary over more-established Republican figures and soon began to implode.

“In the 20 years that I’ve been involved politically, I’ve never had the misfortune of working with such sheer, utter incompetence,” said Chris LaCivita, political director for the National Republican Senatorial Committee, of Angle’s campaign after Reid won by 5 percentage points.

That election, however, did leave Reid with a diminished majority and put the House in Republican hands. Legislative victories would be harder to come by. In 2013, in acknowledgment of that reality, Reid and his fellow Democrats changed the ground rules when it came to filibusters, greatly limiting their use when it came to presidential appointments. “The American people believe the Senate is broken, and I believe the American people are right,” Reid said. Republican Senate leader McConnell dubbed it a “power grab,“ though the Kentucky Republican would make use of those rules once Donald Trump was elected president in 2016.

Democrats lost the Senate majority in November 2014. Weeks later, the fitness aficionado — the boxer had over time become a marathon runner — sustained a major eye injury while exercising. The damage to his right eye was so severe he underwent multiple surgeries and sported an eye patch on the Hill.

In March 2015, he announced he would not seek a sixth Senate term. There was some speculation that he did so because he feared a tough battle in 2016, but Ralston dismissed that notion. “Reid is a lot of things: Brusque with everyone, master of strange locutions, nasty with his enemies. But one thing he is not is afraid,” he wrote.

Subsequent elections indicated Reid retained considerable influence on Nevada politics, helping to pull Democrats Catherine Cortez Masto and Jacky Rosen over the finish line in closely contested Senate elections in 2016 and 2018. Their victories were seen as a tribute to Reid’s political strength.

“It’s the only state in the nation,” Marc Caputo wrote in 2019, “whose U.S. senators are both women and where women constitute the majority of the state Legislature and congressional delegation — a triumph of progressivism and political organization powered by former Senate Majority Leader Harry Reid’s vaunted political machine.“

Reid also remained a critic of President Donald Trump and his old foes in Congress. “People are under the false impression that Trump created the Republican Congress. Wrong. They created him, they created him,” he said in 2017.