Harry Reid, who led Senate Democrats for 12 years, dies at 82 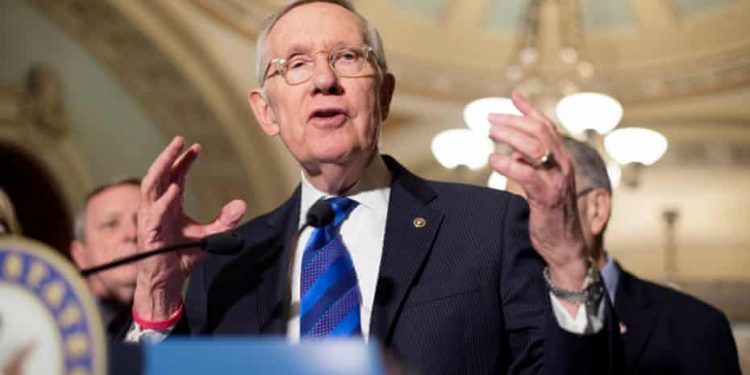 Harry Reid, who emerged from the unforgiving political landscape of Las Vegas, Nevada, to lead the Senate Democrats for 12 turbulent years, died on Tuesday at age 82.

Tributes for the late Senator poured in after the news of his death.

The Democratic Senate majority leader Chuck Schumer called Reid “one of the most amazing individuals I’ve ever met”.

“He was tough-as-nails strong, but caring and compassionate, and always went out of his way quietly to help people who needed help,” Schumer said in a statement.

Steve Sisolak, the governor of Nevada, said that calling Reid “a giant” failed to “fully encapsulate all he accomplished on behalf of the state of Nevada and for Nevada families. There will never be another leader quite like Senator Reid.”

Reid’s reputation as a quiet leader with a sometimes quick temper was reinforced by decades of hard-fought legislative wins, including the passage of Barack Obama’s Affordable Care Act, an economic stimulus package following the 2007-08 recession and the Dodd-Frank financial reforms.

But his policy legacy was marred in some eyes by his push in 2013 to alter Senate rules to make it easier to confirm Obama’s judicial nominees, a move that paved the way for Donald Trump’s controversial supreme court nominees to be confirmed by a simple majority.

Reid defended the tactic to the end.

Reid’s sometimes defiant bluntness was forged by a childhood in Searchlight, Nevada, a desert crossroads where his father was a gold miner and his mother did laundry for the brothels. The family home had no indoor toilet, hot water or telephone and the town had no high school, so Reid boarded with relatives 50 miles away.

Reid and his wife, Landra, met as students at Utah State University, where they converted to Mormonism. In the 1960s the couple moved to Washington DC, where Reid enrolled at George Washington University law school and worked six days a week on the police force patrolling the Capitol, where he would later climb the heights of political power.

First, the amateur boxer had to come up through the harsh terrain of Nevada politics, defined by Las Vegas, the state’s casino interests and the presence of organized crime.

At the end of her husband’s four-year stint as Nevada gaming commissioner in 1981, Landra Reid found an explosive device in the family station wagon. As Senate majority leader decades later, his chief of staff told the New Yorker, Reid still weighed conflicts by reflecting: “No one is going to kill me over this.”

Multiple Republicans bore scars from tangling with Reid. During the 2012 presidential race between Obama and Mitt Romney, Reid announced on the floor of the Senate that Romney had not paid taxes in 10 years: an unfounded and ultimately debunked claim spurred by Romney’s refusal to release a full set of tax returns.

Asked if he regretted the charge, Reid said: “Romney didn’t win, did he?”

Trump found his way into a war of insults with Reid after the New York developer, then a candidate, criticized Hillary Clinton’s health. Reid replied that Trump was in no position to criticize because he “is 70 years old, he’s not slim and trim, he brags about eating fast food every day”. Trump then mocked Reid for an exercise accident a year earlier that had blinded the senator in one eye.

In December, Reid called Trump “amoral” and “the worst president we’ve ever had”.

Trump had reason to resent Reid. So well-oiled was Reid’s political machine in Nevada that the state bucked national demographic trends in 2016 to reject Trump. In 2018, voters threw out incumbent Republican senator Dean Heller.

Efficacy behind the scenes became a trademark for Reid, who won loyalty from colleagues for his willingness to bestow credit and cede the limelight.

“I know my limitations,” Reid told the New Yorker in 2005, the year he took leadership of the Democrats in the Senate. “I haven’t gotten where I am by my good looks, my athletic ability, my great brain, my oratorical skills.”

Reid is survived by his wife, five children and 19 grandchildren. Asked in March last year what he thought of Washington since his retirement, Reid shrugged: “I just shake my head is all I can do.”