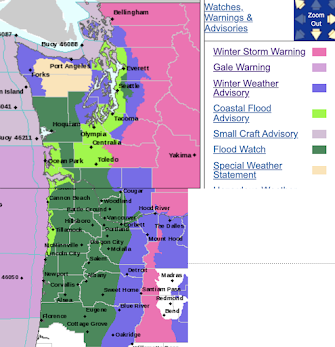 The National Weather Service has flood watches (dark green) out for large portions of western Washington and western Oregon for a good reason:  the combination of heavy rain, radically warming temperatures, and melting low-level snow will throw a huge amount of water on the landscape.

The amount of precipitation predicted during the next 48 h is enormous, with rain dominating over the lowlands (see UW WRF forecast below).  You rarely see such heavy amounts over the entirety of SW Washington, with some values reaching 3-10 inches of liquid water.

Add to that, the substantial lowland snow that will be melting (see snow water analysis below).

The NW River Forecast Center in Portland is predicting moderate (red dot) to major (purple) floods, with the Chehalis River being a particular concern.

Regarding snow, many of you will see some snowflakes later this afternoon, but accumulations will be minor (no more than an inch for most), but this will be wet, rapidly melting snow that will be gone tomorrow morning as the warm air surges in.
The big exception will be NW Washington and the northern Olympics, where the cold Fraser River outflow will allow more snow to pile up (see 24-h snowfall forecast ending 4 AM tomorrow).   Great snow event for the Cascades and eastern Washington.

Smokers up to 80% more likely to be admitted to hospital with Covid, study says