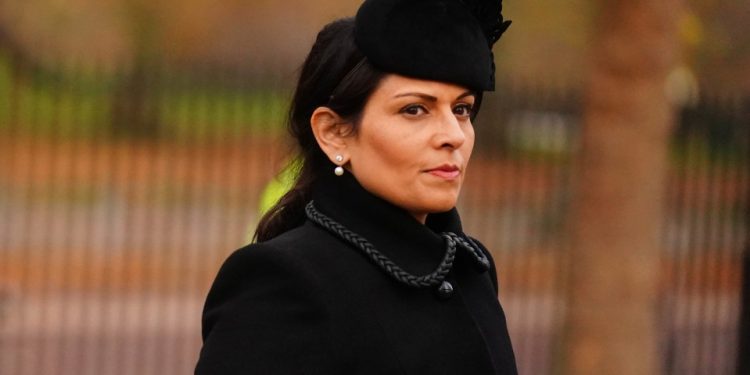 Individuals who post racist abuse online could be banned from attending football matches in England and Wales for up to a DECADE, Priti Patel has confirmed.

The Home Secretary is reportedly bringing forward legislation so football banning orders, which can be imposed on those convicted of violence, disorder and racist or homophobic chanting, can be expanded to include online hate offences.

The Home Secretary said: “Those responsible for racist abuse online must be punished.”Getty

Sky and the Daily Telegraph reported the new law was likely to take the form of an amendment to the Police, Crime, Sentencing and Courts Bill early in the New Year.

It comes after Boris Johnson in July said the Government would change the orders to cover online racism.

He condemned the racist abuse directed at some England players following the team’s defeat in the Euro 2020 final.

But he rejected a call by Labour leader Sir Keir Starmer to condemn Patel for dismissing the team’s actions in taking the knee at the start of matches as ‘gesture politics.’

Bukayo Saka, Marcus Rashford and Jadon Sancho were subjected to vile abuse online after England’s defeat to Italy in the Euro 2020 finalGetty Images/Instagram

“This summer we saw the beautiful game marred by disgraceful racism from online trolls, who hid behind their keyboards and abused our footballers,” the Home Secretary told Sky Sports.

“Racism is unacceptable and for too long football has been marred by this shameful prejudice.

“Those responsible for appalling racist abuse online must be punished. The changes to the law I am announcing will make sure they are banned from attending football matches.”

Culture Secretary, Nadine Dorries, said: “Racist abuse flooding footballers’ social media feeds all hours of the day has a profound impact on everyone involved in the game and it has to end.

“We are tackling this abhorrent behaviour in all forms. As well as banning racists from games, we are introducing ground-breaking new laws to stamp out abuse online and make sure tech firms tackle the hate on their sites.”

Shadow Sports Minister Lord Bassam said: “I am very happy that the Government is finally taking action against this sort of disgusting abuse online. But it is not before time as we proposed adding this to the Policing Bill over a month ago.

“The banning order regime should also be extended to other sports.”

Poland Willing to Pay for Permanent US Military Presence