Hundreds pay respects to Desmond Tutu ahead of low-key funeral 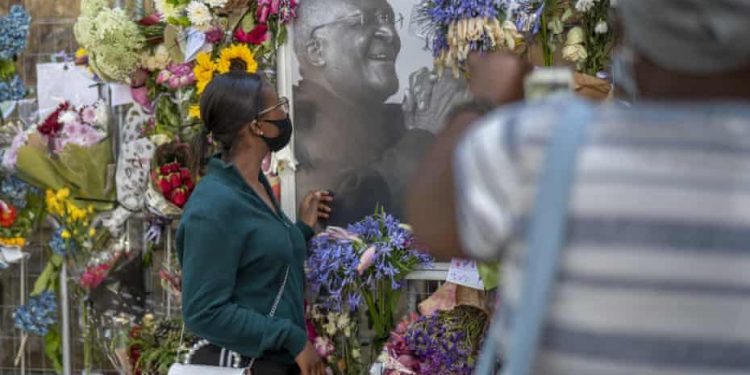 Hundreds of mourners queued outside Saint George’s cathedral in Cape Town, waiting to pay their respects before the plain wooden casket bearing the remains of Archbishop Desmond Tutu, who died six days ago aged 90.

Clerics, family members, close friends and dignitaries will attend a requiem mass for Tutu, the icon of the fight for freedom in South Africa, on Saturday morning. Their numbers will be restricted due to Covid regulations. President Cyril Ramaphosa is expected to read a eulogy.

Though the former archbishop of Cape Town had largely retreated from public life in recent years, Tutu had continued his lifelong fight for causes he believed in, forcefully supporting LGBT rights, equal access to education and the assisted dying movement.

Tributes from world leaders poured in after Tutu’s death was announced on Sunday, and within South Africa, many have been deeply moved by the passing of the last great hero of the struggle against the repressive, racist apartheid regime.

In a national address earlier this week, Ramaphosa called Tutu a man of “extraordinary intellect, integrity and invincibility against the forces of apartheid”.

Church bells have been rung at noon across South Africa every day and flags flown at half-mast for the man often described as the “moral compass” of his country. There have been dozens of memorial services, South Africa’s cricket team wore black armbands on day one of the first Test against India in South Africa, and Cape Town’s Table Mountain was lit up in purple in Tutu’s honour.

Tutu, who requested a funeral without lavish expense or ostentation, would be cremated and his ashes interred beneath the floor of St George’s behind the cathedral pulpit, church officials said.

Since Thursday morning, mourners have filed through the cathedral to light candles. Many sat in the pews to pray and reflect.

The cathedral, the Anglican church’s oldest in southern Africa, dating back to 1847, was converted by Tutu into a centre of anti-apartheid activity during the 1980s. When the apartheid regime banned political gatherings, Tutu held meetings in the cathedral where participants bowed their heads ostensibly in prayer and heard political speeches. Nelson Mandela, a close friend of the cleric, called it the “People’s Cathedral”.

Among the mourners were young activists who said they had been inspired by “The Arch”, as Tutu was known locally.

“We believe the Arch stood for the same values that we want to aspire to in society,” Irfaan Mangera, a pro-Palestinian South African activist, told Reuters as he waited in the long queue, draped in the Palestinian keffiyeh.

“[Tutu] was one of the figures who continuously united us … and we want to continue in that path as young South African activists who emulate the values of non-racialism and non-sexism.”

“He was a very humble man but to sit in the same room with him, you could feel the strength of his presence, of his convictions,” said Rev Maria Claassen, an Anglican priest in Cape Town’s Durbanville area. “He inspired us and now we celebrate his life.”

Amanda Mbikwana, 29 and born shortly before the end of apartheid, said she had come to remember Tutu for “all he has done for us as Africans”.

Tutu’s career in the church began after he resigned a sought-after teaching post in protest against South Africa’s discriminatory laws in 1958.

By the late 1970s, the diminutive cleric was one of the leaders of the freedom struggle best known overseas and played a leading role in forcing western leaders to confront the moral cost of cold war calculations that led to tacit support for white-minority rule in South Africa.

In recent years, Tutu did not shy away from criticism of the African National Congress party, in power in South Africa for 27 years, attacking the party’s failures and alleged corruption.

The service will be an Anglican requiem mass led by Michael Nuttall, the retired bishop of Natal, who was known as “number two to Tutu”, church officials said.

After the viewing on Friday, Tutu’s body will remain alone in the cathedral, “a place that he loved”, according to a statement from Archbishop of Cape Town, Thabo Makgoba.

National League North Kidderminster beat Championship side Reading in FA Cup, while fellow non-league side Boreham Wood reach fourth round for first time in their history