Hunger in Tigray pushing women and girls into sex work 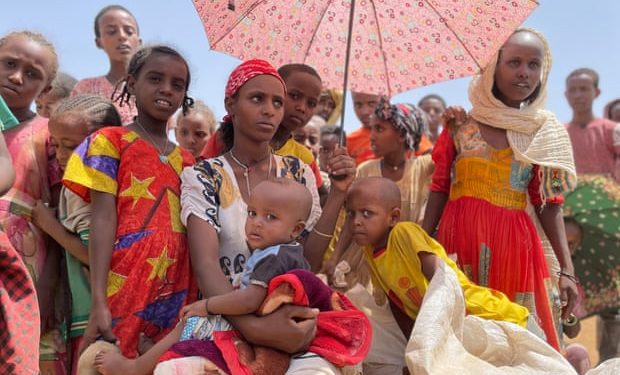 Hunger in the besieged region of Tigray is pushing people to increasingly desperate measures as the authorities are systematically blocking and confiscating remittances needed by millions of people.

Banking services and all communications have been cut off to the state by the Ethiopian administration since last year, with 6 million people denied access to their own money.

In the absence of aid and banking, people had been largely relying on money from family and friends abroad to survive but restrictions have been imposed on remittances by the Tigrayan authorities, and action against smugglers bringing money in has intensified at checkpoints.

Reports from inside Tigray say many women and girls are being forced to turn to sex work to survive while others suggest there has been an increase in suicide.

Last week, EU and US envoys urged the Ethiopian government to swiftly resume services and lift restrictions on fuel essential for aid distribution.

When the Tigray rebel forces returned to power a year ago, after nearly eight months of fighting with Ethiopian federal forces, Hewan* thought life might improve. Food had never before been an issue for the 16-year-old and her family, who had had a good life, she said.

“Now I am hungry. My parents and siblings are hungry. For months, we waited in vain to receive aid,” said Hewan.

“Relatives abroad had been sending us money through smugglers. But it is tough to find remittance smugglers these days. Those we knew are no longer operating. We sold every property we had. There is nothing to eat at home. So, I went to the street to sell my body. What option do I have?”

Like Hewan many women and girls in Tigray’s capital, Mekelle, are engaging in survival sex, including underage girls and women who once had promising careers.

Zufan* has a master’s degree in project management and before the war the 27-year-old had a well-established career with a good salary and a plan to pursue a PhD. These days she is selling her body to survive the hunger which claimed the life of her parent.

“I watched my father die from malnourishment. He died in my hands. My mother is all bones. The warehouses are full of aid enough to feed the city. Fuel is not required to distribute aid within Mekelle. But people are dying unable to receive the aid they are entitled to. After I lost my father to starvation, I needed to do something to save my own life and my mother’s. Hunger does not give you time. I tried begging. But it does not work as there are many beggars. I became a prostitute,” Zufan does have money in her bank account, but banks in Tigray have stopped giving out money, cut off from the central federal system and empty of cash.

For many desperate Tigryan women who had exhausted all alternatives, sex work ffers the only lifeline.

Last month, the news about a civil servant who killed himself in Mekelle after finding it unbearable to watch his three children starve and his wife beg for food, was widely circulating in the city.

Araya*, 60, is a landlord and lived on rental income from the houses he owns, but he has not been able to collect rent from his out of work tenants who have no money to pay him.

What sustained his life was the remittance his children sent him through the smugglers.

Based on negotiations with the sender, the smugglers take 30% to 50% of the remittance and arrange the delivery of the remaining amount to the recipient.

“Without remittance, I would have gone begging or died from hunger. I am so worried to learn that many of the smugglers are being driven to stop operations. There is no other means of survival.” said Araya.

Smugglers blame Tigray authorities for systematically putting them out of operation by setting up border posts with officers who restrict, block and confiscate remittances, which have already been made illegal by the Ethiopian government.

“Trying to get money into Tigray is a frustrating and risky work in the first place. It is not allowed by the federal government. Transportation is blocked into the region. We do it through connections and by bribing officers. That’s why we take up to 50% of the remittance. Otherwise, it is impossible. And after passing through many obstacles to reach Tigray, if we don’t have any guarantee from the Tigray authorities to deliver the cash to the starved, why should we take risks?” said Tsegay*, a former smuggler who quit the work in May after being stopped at the border by Tigrayan officers.

Smugglers described harassment, criminalisation, unpredictable restrictions on the amount of money one can carry into Tigray, and confiscation of money intended for hungry people.

“This is business to us, but lifesaving to the people dying from starvation. I don’t know why the authorities are creating such restrictions on us while millions are starving to death. Previously, the flow was smooth once it reached the Tigray border. But after April it has become a nightmare. My colleagues and I left the business because of that,” said Abadi*, another former smuggler. “We want free access at least in Tigray. Otherwise, it is not worth it. It is money to people suffering in famine after all. There should not be any hindrance. This is cruel.”

Others accused Tigray authorities of confiscating the money for themselves at the checkpoints.

“There was 73,000 birr (£1,147) I tried to deliver. The money was sent to family members in a terrible condition with nothing to eat. Tigray authorities took the money. I was not given any valid reason by their officers. Of course, publicly they give many excuses. But the reality is they set up the posts to grab money at the expense of dying family members. I stopped the work after that incident. There was no guarantee to continue,” said Berket*, another former smuggler.

An internal decree seen by the Guardian corroborates the testimonies. The decree states it is illegal to carry more than 100,000 birr, and cash which flows to the region should be reported to posts in the border. If someone is found operating outside this, the person will be charged with committing a crime, and the Tigray government can directly confiscate the money, based on the decision of a committee established for the task.

The committee is chaired by Fetlework Gebregziabher, vice president of the Tigray government. The decree is signed and stamped by Fetelework and has been in operation since April.

A spokesperson of the Tigray government denied money was being confiscated and told the Guardian there is not enough cash coming in to justify any such restrictions.

“We rather encourage any possible cash inflow. But illegal activities need to be controlled,” he said.

*Indicates name has been changed.

Rust armorer has ‘no idea’ how live bullets found way on to set, lawyers say