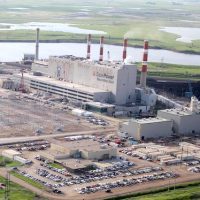 The International Energy Agency praised yesterday Canada for a set of “bold” climate policies that point toward “an ambitious transformation of its energy system,” despite its finding that increased fossil fuel production drove up the sector’s greenhouse gas emissions 26% between 2000 and 2019.

The 261-page Canada 2022 Energy Policy Review is a detailed compendium of the country’s energy resources and climate policies, one of a series of five-year reviews produced by peer reviewers from other countries.

But while the recommendations at the end of each chapter read like a laundry list of overdue action items on the road to a carbon-free future, the narrative in the report positions Canada as a climate leader among the world’s major fossil fuel-producing countries.

“The IEA may have out-Canadianed their subject matter in politeness,” snarked one veteran Canadian climate analyst.

“Since the last IEA in-depth review in 2015, Canada has made a series of international and domestic commitments, putting the country on a path towards an ambitious transformation of its energy system, while remaining a stable and reliable supplier of energy to the world,” IEA Executive Director Fatih Birol wrote in his foreword to the report.

“Achieving Canada’s enhanced targets presents both challenges and opportunities given the country’s profile as a major producer, consumer, and exporter of energy,” he added. “Moreover, its highly decentralized system of government means coordination among federal, provincial, and territorial governments is essential for a successful energy transition.”

Among the advantages it sees in Canada’s current energy profile, the IEA lists its national energy and climate targets, carbon pricing system, and commitments to phase out coal, control fossil methane emissions, and extend the life of its nuclear power plants, as well as an 83% decarbonized electricity system that is “among the cleanest in the world”.

The Roads Not Taken

In its top-line recommendations, the IEA called on Canada to model a pathway to net-zero emissions by 2050, enhance the federal government’s role in boosting interconnections among provincial power grids, set clear sectoral targets for energy efficiency, and “increase federal funding in support of accelerating R&D and innovation of clean energy technologies to achieve 2050 targets, with an eye to also advancing future export opportunities.”

But the nearly four dozen recommendations that didn’t make the cut for the executive summary included basic, longstanding policy and program gaps that one might have expected a bold international climate leader to have corrected by now. They include:

• Completing the country’s long-overdue fossil fuel subsidy review, as a first step to a subsidy phaseout;

• Developing a “comprehensive energy efficiency strategy”, with a full analysis of the potential and clear targets by sector;

• Adopting stronger policies to drive energy efficiency in transportation and encourage a shift to public transit, biking, and walking in urban centres;

• Modelling net-zero pathways for the electricity system that specify “the roles for each power source as well as implications for transmission capacity and storage”;

• Helping provinces and territories tap into new opportunities in the electricity system, including distributed generation, demand response, smart grid technologies, energy storage, and the rise of “prosumers” who both buy electricity and sell it back to the grid;

The IEA also recommended a “strong liability management system” for abandoned oil and gas wells. In recent years, an official at the Alberta Energy Regulator has placed the cost of those “unfunded liabilities” at C$280 billion, while the AER itself estimated it would take 2,800 years at present rates to clear the backlog.

But none of those priorities received very much emphasis when Birol and colleagues presented the report to Canadian media Thursday.

Fossil Industry Exports: To 2050 and Beyond

In an apparent step back from the IEA’s most recent modelling and analysis, this week’s report envisioned a continuing role for Canada as a major oil and gas exporter through 2050 and beyond.

In its landmark 2050 net-zero scenario last May, the IEA projected global oil consumption falling 75% between 2020 and 2050, to 24 million barrels per day, gas demand decreasing 55%, and remaining oil production becoming “increasingly concentrated in a small number of low-cost producers,” which would be a strangely inaccurate way to describe Canadian fossils.

“Beyond projects already committed as of 2021, there are no new oil and gas fields approved for development in our pathway, and no new coal mines or mine extensions are required,” the IEA wrote at the time. “The unwavering policy focus on climate change in the net-zero pathway results in a sharp decline in fossil fuel demand, meaning that the focus for oil and gas producers switches entirely to output—and emissions reductions—from the operation of existing assets.”

Though Canadian fossils have reduced their greenhouse gas emissions per barrel of oil, or emissions intensity, by 20%, the IEA said the number of barrels they extract has grown quickly enough to drive up actual emissions by 26% between 2000 and 2019. That means “Canada will need to reconcile future growth in oil sands production with increasingly strict greenhouse gas requirements,” the report stated.

But while the agency called for Canada to set clear emission reduction targets for oil, those targets must still “align with stated plans to continue oil and gas exports beyond 2050 with net zero ambitions,” the IEA declared.

“There will still continue to be a role for fuels, including some oil and gas, in a net-zero pathway,” lead author Divya Reddy told the media conference. “However, the key to remaining competitive is not only to be cost-competitive, but also to be environmentally competitive.” So policy support for technology investment “to significantly decarbonize upstream oil and gas production from where it is today will be crucial for Canada to be able to play in that space.”

Carbon Capture Above All

With that continuing role as an oil and gas exporter as a backdrop, the IEA praised Canada’s efforts to date to help the fossil industry reduce its production emissions and urged more of the same. As home to four of the world’s 26 carbon capture and storage facilities, Birol declared the country a global leader in the field, while citing CCUS as one of the top three decarbonization technologies among the more than 80 the IEA reviewed to produce its net-zero scenario.

“In the absence of CCUS, we cannot come close” to a net-zero target, he said. “It will be much more difficult, if at all possible.”

That means “improving the rate of energy technology innovation will be critical to enable the deep decarbonization across sectors required to achieve net-zero emissions by 2050,” stated the IEA’s executive summary. “To this end, Canada is actively advancing a number of technologies, most recently announcing additional support for carbon capture, utilisation and storage (CCUS); hydrogen; and nuclear small modular [nuclear] reactors (SMRs), with a view to serving as a supplier of energy and climate solutions to the world.”

David Schlissel, an analyst with the Institute for Energy Economics and Financial Analysis, said it’s worthwhile to fund R&D on carbon capture technologies that might eventually make a difference for energy-intensive industries like steel and cement. But only if the main emphasis is on renewable energy and energy efficiency technologies that can already deliver 80% of the carbon cuts the IEA and others are looking for by 2050.

“You do those first while you’re doing your R&D on CCUS, then see how it comes down in 20 years,” he said in a phone interview yesterday. But it’s a serious mistake to claim that CCUS is ready to deploy when, at this point, “it’s not proven.”

Like other CCUS adherents, the IEA identifies the Boundary Dam CCUS project in Saskatchewan as a success story. But Schlissel said the plant has run into serious problems over the last year, capturing only 50 to 60% of the carbon from the coal plant to which it’s attached when the success standard for carbon capture is 90%. In early January, S&P Capital IQ reported that carbon capture at the persistently troubled project had fallen to its lowest level since 2015.

Last year, Schlissel told The Mix that a federal tax subsidy to support more projects like Boundary Dam could end up driving up emissions if fossil companies use the carbon they capture to increase their oil production through a process called Enhanced Oil Recovery (EOR). “You now have a plant that has two products,” he said at the time. “Yes, they produce electricity, and they’re also a factory for CO2. The more CO2 they produce, the more they can capture, and the higher their revenues are, so they have an incentive to run the plants more to capture more CO2. All in the name of reducing our CO2 emissions in order to help stave off climate change.”

While the federal government specified last year that its CCUS tax credit was not intended for EOR projects, The Mix reported last year that 81% of carbon captured through CCUS is used for precisely that purpose.

But the other assumption the IEA, Canada, and other CCS proponents are making is that the technology is ready to scale up, when “the correct answer is, no, it isn’t,” Schlissel said yesterday. “Even if the proponents were correct that it’s been shown in a place like Boundary Dam, it’s only been shown in very short spurts, literally days where they’ve run at full capacity. And what you’re talking about is installing carbon capture technology in these facilities where you want it to run all the time, as much as possible, for years and years and years. That’s not proven today.”

University of Waterloo political scientist Angela Carter added that the IEA is silent on who will pay the enormous cost of CCUS development—a question that fossil executives like Cenovus Energy CEO Alex Pourbaix have been only too happy to answer on behalf of Canadian taxpayers, to the tune of $52.5 billion through 2050.

More broadly, Carter called the IEA’s latest analysis a “step back” for the agency and a missed opportunity to “draw attention to one of the leading global oil and gas suppliers in the world.”

With its emphasis on no new fossil fuel exploration or expanded production, no new investment in fossil supply, and global oil demand permanently staying below its 2019 peak, the agency did a good job of presenting a “science-aligned target” in its net-zero pathway, she told The Mix. So it was “jarring” to read a Canada report that “uncritically accepts the government’s position that oil production continues to increase for the next 20 years, then leans heavily on technological solutions to decarbonize oil and gas production. It does that using questionable means like CCUS, and maybe turning renewable assets like mega-hydroelectricity toward electrifying oil production, which of course only justifies and fosters expanded oil and gas production.”

That vision of Canada’s energy future “misses the point,” Carter said. “It’s an avoidance tactic, and it’s a misuse of our renewable energies. We need that energy to decarbonize transportation and secure better efficiencies out of our buildings. So I’m disappointed…this was a chance for the IEA to shine a spotlight on the juxtaposition between Canada’s ever-increasing emission reduction targets and its fervent commitment to increase oil and gas production. It’s a contradiction, and it’s one the IEA has let stand.”

Carter said the IEA report misconstrued the government’s $320-million bailout to fossil operators off the Newfoundland and Labrador coast as a support fund for offshore oil workers, when the companies’ deal with federal and provincial governments contained no guarantee that jobs would be restored. It also sidestepped mounting concerns about the downstream emissions from Canadian fossil production, she added, with no apparent attention to the 80% of the emissions in a barrel of oil that occur after the product reaches its end user.

“It is now well documented that our oil and gas exports in Canada are a risk to the global climate, so focusing on decarbonizing production only addresses the smaller part of the problem,” she said. “By extracting and exporting massive quantities of fossil fuels, Canada is throwing fuel on the climate fire. Authentic climate policy means winding down fossil fuel production, period.”

No future without sustainable investment