‘I’m ready to go’ – British No.1 Emma Raducanu confirms she will play at Wimbledon, despite training no-show and injury doubts 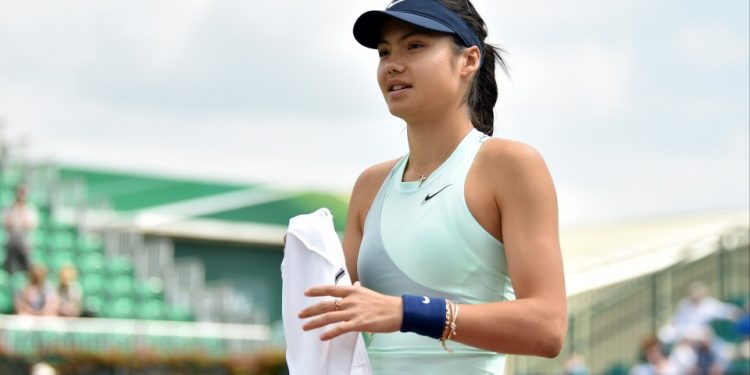 Emma Raducanu says it’s ‘full steam ahead’ for Wimbledon now, as she confirms she will play after there had been doubts she would be able to participate.

There has been much discussion about her fitness, but the British No. 1 has now announced she’ll be playing in this summer’s Grand Slam and that she’s raring to go for the competition.

The world’s oldest tennis tournament is set to get under way again on Monday, but this year will see it look very different to those that came before it.

The WTA and ATP opted to remove the competition’s ranking points after Wimbledon’s organisers’ decision to ban Russian and Belarusian players from participating following the invasion of Ukraine.

But, most notably, it could have also been missing one of Britain’s tennis stars in Raducanu.

Last year’s Wimbledon saw the British star become one of the stories of the tournament, going on an impressive run and making it to the third round despite it being her main-draw debut.

However, this year the US Open champion had been a doubt ahead of the Grand Slam, with her suffering numerous injuries and being a no-show for a scheduled Wimbledon practice on Friday.

Now, though, Raducanu has confirmed she will in fact be participating in the tournament.

“And now it’s full steam ahead. Everyone’s really looking forward to it. We’re all ready. Right now I’m fit. I’m ready to go,” the star said in a statement.

On missing the training session, she said: “I already practised in the morning. So we all collectively thought it was the best decision to pass on the afternoon session.”

She continued: “I feel like last year I came straight out of my exams, I was fresh, ready to play. I feel the same excitement this year, because I think Wimbledon just brings that out of me especially.”

Prior to Raducanu’s announcement, former British tennis player Barry Cowan told talkSPORT that she was likely to be present for her first match despite the speculation.

However, he also stated it could be tough for her both on and off the court, given she’s failed to perform as well as she did at the US Open recently.

“From what I hear, certainly from what I heard yesterday, it’s more unlikely she won’t play, than she will play.” the former Wimbledon competitor explained on The Warm Up with Charlie Baker and Lloyd Griffith.

“But even if she was 100 per cent, the draw would’ve been really tough, because her opponent Van Uytvanck has won a couple of grass court tournaments.

“Albeit, lower level tournaments, but still she’s won a lot more tournaments in the last few weeks than Raducanu.

“She’s still so young, and going from what she was which is obscurity into one of the most well known female sportswomen in this country would be difficult for her right now.”

When it comes to the pressures and expectations placed on her, though, Raducanu was optimistic.

“I take whatever feeling as positive. I think people are going to be behind me and cheering me on,” she said.

“There’s nothing sort of negative about that. They want you to do well. I’m looking forward to going out there and experiencing that and feeling that.”