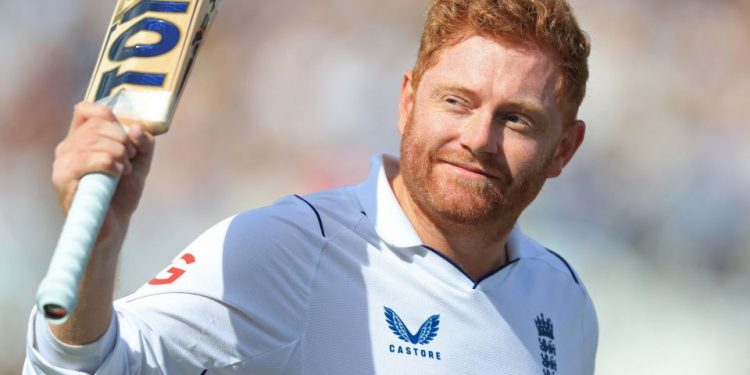 Jonny Bairstow produced an innings for the ages as England claimed a thrilling and unlikely victory over New Zealand at Trent Bridge.

Ben Stokes’ men clinched the three-match series by chasing down 299 in 50 overs on the final day, claiming an astonishing five-wicket victory over the Kiwis.

A thrilling innings from Bairstow inspired England to victoryAFP

After slipping to 93/4, including the loss of talisman Joe Root before tea, there were fears of an all-too familiar England collapse until Bairstow arrived at the crease.

Despite the high stakes, he hit 136 off 77 balls, recording the second-fastest Test century in England history.

Bairstow eventually fell at 272/5 – but the remarkable job was already done in front of a sell-out crowd in Nottingham and the remaining runs were a formality for Stokes and Ben Foakes.

Stokes battled through a knee injury to bludgeon his side to victory, with the captain finishing on 75 not-out as England chased their highest-ever Test total at Trent Bridge.

Stokes was sensational too as England ended their barren runAFP

Five best bets for Royal Ascot: With a 12/1 outsider and 9/2 serial winner

A run of five series without a win has been ended by two extraordinary victories over a New Zealand team which was top of the Test Championship.

But it is the gung-ho nature of both wins which truly marks a rejuvenative start to Stokes’ reign as captain under new head-coach Brendon McCullum.

England were seemingly up against it after the tourists piled on 553 runs in their first innings, but a transformative approach saw the fearless hosts claim one of their greatest-ever and most unlikely wins.