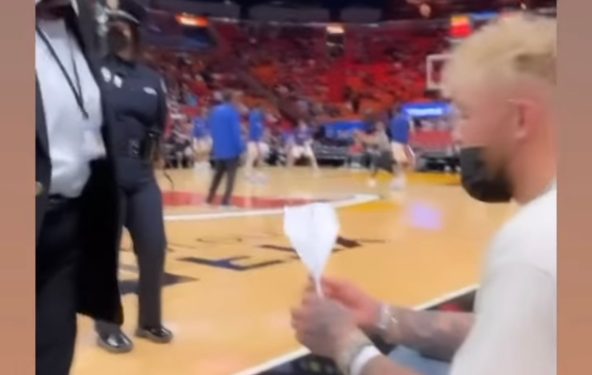 Jake Paul has been causing problems for fighters in the boxing ring – and is now giving stewards at basketball games grief too.

The Problem Child was living up to his name as he took girlfriend Julia Rose to see the Miami Heat host the Detroit Pistons court-side.

After stealing the stat sheet from the scorers table, Paul made a paper airplane which had arena staff concerned he was going to throw it onto the court.

Miami would win the game 115-112, while Paul and Rose were able to enjoy the game controversy free.

There is history with Paul and the NBA after the Miami-resident fought former NBA player Nate Robinson in his second professional fight.

Paul scored a devastating knockout in the second round.

His most recent bout saw him knock Tyron Woodley out in their rematch to extend his record to 5-0 with four KOs.

Since then, the 24-year-old has had plenty to say about who he wants to face next and it seems as though he’s still targeting mixed martial artists for boxing fights.

One might have assumed that Paul’s next step would be rearranging the fight with Tommy Fury, but that doesn’t appear to be on the cards right now.

“Just asked my team if we have heard from the Fury’s, Frank Warren, or Queensberry… not a f*****g peep!

Jake left Woodley out cold with a brutal right handGetty

“Fumbles and fake f**ks they are.”

Fury did say earlier this week that he’d be prepared to make the fight again for March. The Brit had to pull out of their original date because he broke a rib while coughing with a chest infection.

The 35-year-old lost to Anderson Silva via split decision earlier this year and in light of the news, he has said he is open to fighting Paul.

However, Paul says he’s taking a vacation first and foremost.

“I don’t really know what’s next on the roadmap.

“I’ve done it all, I’ve accomplished what I want to accomplish.

“I need to take a break, I’ve been going at this non-stop for a year and a half and it’s a lot.

“I’m exhausted, I need to spend time with my family at Christmas and go on a vacation, I haven’t gone on a vacation since I was 18 years old.

“I told myself ‘not until you feel like you’ve got to a place in life where you deserve a vacation’ and I deserve it now.

“I’m going to go on my first real vacation where there’s no obligations, because I’ve gone on vacations where I have to film it, vlog it, do interviews and wake up at a certain time to work out.

“I’m going on a real vacation and doing backflips into the water – I’ll come back whenever I feel like it.”

Vaccines to be required for open travel ‘for evermore’, says Shapps