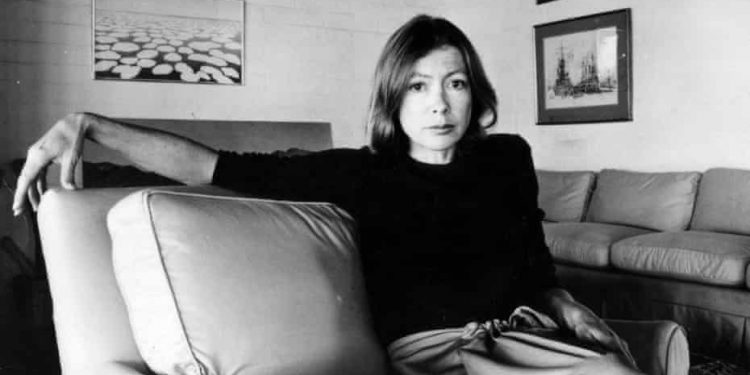 Joan Didion, the eminent journalist, author and documenter of contemporary America, has died at her home in Manhattan, New York, the New York Times has reported. She was 87 years old.

The cause of death was Parkinson’s disease, according to an email sent to the newspaper by Paul Bogaards, an executive at Didion’s publisher Knopf.

Known for her pioneering blend of the personal and the political in her journalism and essays, Didion became a household name with her writing on US society. A standout female figure in the very male New Journalism movement alongside Tom Wolfe, Truman Capote and Gay Talese, Didion cast her precise eye over both American society and her own life in writing that was collected in books including Slouching Towards Bethlehem and The White Album. Famous for her detached, sometimes elegiac tone, Didion returned to alienation and isolation throughout her career, whether she was exploring her own grief after the death of her husband John Gregory Dunne in the Pulitzer-winning The Year of Magical Thinking, the emptiness of Hollywood life in the novel Play It As It Lays, or expats caught up in central American politics in her novel A Book of Common Prayer.

Born in Sacramento in 1934, Didion spent her early childhood free from the restrictions of school, with her father’s job in the Army Air Corps taking the family all over the country. A “nervous” child with a tendency to headaches, Didion nonetheless began her path early, starting her first notebook when she was five. While her father was stationed in Colorado Springs, she took to walking around the psychiatric hospital that backed on to their home garden, recording conversations that she’d later work into stories. In a 2003 interview with the Guardian, she recalled an incident when she was 10: while writing a story about a woman who killed herself by walking into the ocean, she “wanted to know what it would feel like, so I could describe it” and almost drowned on a California beach. She never told her parents. (“I think the adults were playing cards.”)

From reading Ernest Hemingway and Henry James, she learned to dedicate time to crafting a perfect sentence; she taught herself to use a typewriter by copying out the former’s stories. “Writing is the only way I’ve found that I can be aggressive,” she once said. “I’m totally in control of this tiny, tiny world.”

In 1956, after majoring in English literature at the University of California, Berkeley, she won Vogue’s writing contest when she was 21, which led to a seven-year stint working at the magazine’s offices in New York. There she met Dunne – they’d marry when she was 29 – and between New York and Los Angeles, she began to mix with many famous contemporaries who would become friends, colleagues and rivals: Sylvia Plath, Roman Polanski, Janis Joplin (who crashed a house party), Christopher Isherwood (who called her “Mrs Misery” in his diaries), Warren Beatty and Natalie Wood (who shared her clothes with Didion).

In 1963, her first book was published: the novel Run, River. In 1966, Didion and Dunne relocated to Los Angeles and adopted a baby girl, Quintana Roo, named after the Mexican state. Her first collection of essays, Slouching Towards Bethlehem was published in 1968: with its title essay about Haight-Ashbury’s hippy community, the collection established Didion’s voice as exceptional; in the New York Times’s review at the time, Dan Wakefield called Didion, “one of the least celebrated and most talented writers of my own generation”. In the book, Didion famously rubbished her own skills at interviewing and reporting: “My only advantage as a reporter is that I am so physically small, so temperamentally unobtrusive, and so neurotically inarticulate that people tend to forget my presence runs counter to their best interests. And it always does.”

Didion followed it up with her novel about life in Hollywood, Play It As It Lays, which she later adapted into a screenplay with Dunne; the couple often worked together on screenplays, including the 1976 film A Star Is Born. A smattering of fiction would follow over the next two decades – A Book of Common Prayer (1977), Democracy (1984) and The Last Thing He Wanted (1996) – but non-fiction dominated. Her second essay collection, The White Album (1979) contained her most famous line: “We tell ourselves stories in order to live.” In 1983 came Salvador, a book-length essay about a trip she took to El Salvador with Dunne; Miami (1987), about the city’s Cuban expat community; After Henry (1992), a collection dedicated to Didion’s editor Henry Robbins; and Political Fictions (2001), which spanned the elections of US presidents George HW Bush, Bill Clinton and George W Bush.

Over decades, the diminutive Didion built her own mythology; more than one journalist, when interviewing her, noted her quietness and frail frame with surprise. Her elegant style and interest in fashion, fostered at Vogue, also saw her revered as a a symbol of “cool”; at the age of 80, she became the face of French fashion house Céline.

From the 1980s onwards, Didion focused on politics, coining the term “the permanent political class” to describe the fraternity of media, politicians and strategists that shape the US’s self-image. After Clinton’s impeachment, she wrote: “No one who ever passed through an American high school could have watched William Jefferson Clinton running for office in 1992 and failed to recognise the familiar predatory sexuality of the provincial adolescent.” Among Washington journalists, she wrote, “what ‘fairness’ has often come to mean is a scrupulous passivity, an agreement to cover the story not as it is occurring but as it is presented, which is to say as it is manufactured.”

“For me, writing is a kind of exploration,” Didion told the Guardian in 2003. “I’m not sure that I have a social conscience. It’s more an insistence that people tell the truth.”

When Dunne died of a heart attack in 2003, Didion began writing The Year of Magical Thinking, an exploration of her grief at his death while, at the same time, their daughter Quintana was severely ill in hospital. Unsparingly documenting her resulting strange habits, such as keeping Dunne’s shoes for when he “came back”, the book won her a Pulitzer prize. Months after it came out in 2005, her daughter Quintana died from acute pancreatitis aged 39, which Didion would write about in her 2011 reflection on ageing and parenting, Blue Nights.

When she was presented with her National Medal of Arts and the National Humanities medal in 2012, President Barack Obama told the room: “I’m surprised she hasn’t already gotten this award.”

In her later years, Didion wrote less; her most recent project was as the subject of Joan Didion: The Center Will Not Hold, a 2018 Netflix documentary made by her nephew, Griffin Dunne. Her final book, South and West, was a collection of her notes while travelling around Mississippi, Alabama and Louisiana in the 1970s; when it was released in 2017, it was marketed as a prescient take on the then newly elected president Donald Trump’s base of voters. Talking to the Guardian when it was released, Didion said: “I suppose the crisis in American politics was behind everything I was thinking, whether or not I knew I was thinking it. These things have a way of creeping in. I think we currently are living through the scariest of times.”

PGNiG teams up with Ukrainian company for Lviv gas project

The Netherlands and WHO: Partners for health and human rights around the world