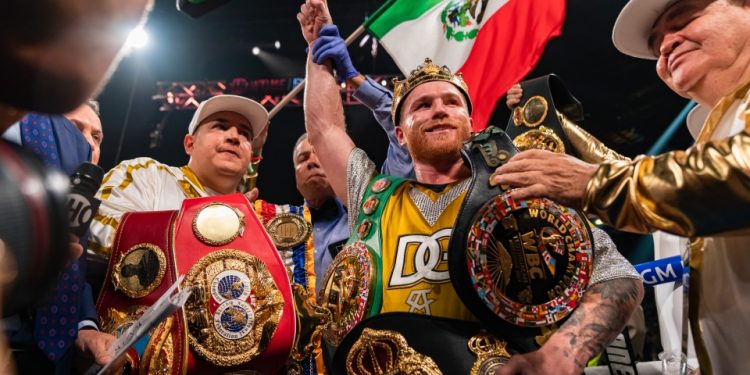 Johnny Nelson has warned Saul ‘Canelo’ Alvarez his ‘biggest threat might be himself’ after the Mexican confirmed his plans to head up to cruiserweight.

Canelo lit up the super-middleweight division in 2021, defeating Avni Yildirim, Billy Joe Saunders and Callum Smith to claim every single major belt and become the first ever undisputed champion at 168lbs.

Having previously conquered the super-welterweight and middleweight divisions, the Mexican moved up to light-heavyweight in 2019 and duly knocked out Serge Kovalev to become a four-weight world champion.

However, the 31-year-old is set on creating yet more history and is eyeing a fifth weight class to enter, by propelling himself all the way up to 200lbs to face Ilunga Makabu.

The Congolese brawler currently holds the WBC title in that division, having been knocked out by Tony Bellew previously back in 2016.

Makabu looks set to be next for CaneloWBCBoxing (Twitter)

“Canelo could be his own biggest threat. He might be biting off more than he can chew by stepping up to cruiserweight,” Nelson told Sky Sports.

“Me, as a former cruiserweight, I’m kind of insulted that this little man is coming up to our weight division. Any worthy cruiserweight will think, ‘No, that’s not happening!’

“That’s why the likes of Oleksandr Usyk are willing to step back down to cruiserweight to prove this. You’ll have a number of cruiserweights like Makabu, who are beatable.

“But then you have other cruiserweights that Canelo should never beat in a million years. Canelo’s biggest threat might be himself.”

Oleksandr Usyk held all of the belts at cruiserweight during his own dominant run, yet relinquished them all to challenge at heavyweight.

The Ukrainian now holds the WBA, WBO and IBF titles after beating Anthony Joshua, but admitted he would entertain a move back down to meet one of the pound-for-pound superstars in world boxing.

“Yes, I can fight him at cruiserweight, “Usyk told Boxing Insider. “But with only one thing – I keep my belts at heavyweight.

“Then I go back to cruiserweight and fight him and then I come back to heavyweight.”

Greenpeace steps up legal fight against Poland’s use of coal