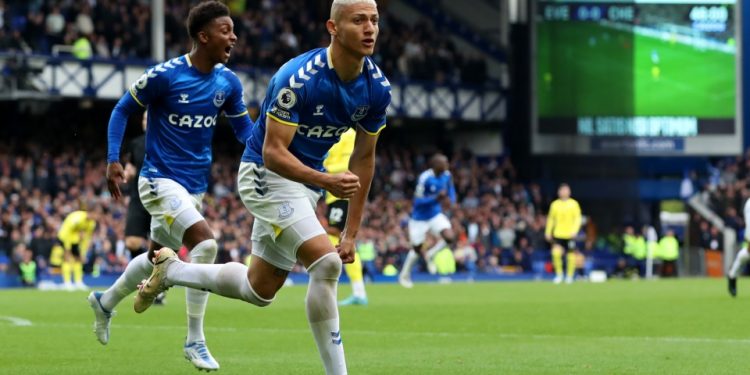 Everton secured a crucial three points in their fight against relegation as Richarlison earned a 1-0 victory over Chelsea.

The Brazilian forward was a constant thorn in the paw of Thomas Tuchel’s defence and took his goal well, while Jordan Pickford pulled off a number of wonderful saves in the second half to keep the hosts in the ascendency.

That victory pushes the 18th-place Toffees to within two points of Burnley and Everton, with a crucial game in hand over their rivals.

As for Tuchel’s side, the Blues are now starting to look nervously over their shoulder as Arsenal and Tottenham’s battle for the top four threatens to suck them in.

However there’s no doubt that the afternoon belonged to Everton and the rapturous home fans who made their presence known as far as 12 hours before kick-off.

The build-up to the match saw home supporters letting off fireworks outside the Chelsea team hotel at 2am, before the teams arrived at Goodison Park in a hostile atmosphere with blue smoke and flares really paving the way to a fiery first half.

Richarlison throws flare back into Everton fans after goal against Chelsea

It took just a matter of seconds for the first free kick to be given as Anthony Gordon was bundled over on the edge of the penalty area, before firing his free-kick wide of the mark.

Crunching tackles, pushing and shoving were all used to get supporters on their feet in the first 45, with both Gordon and Kai Havertz penalised for diving, while the German was also getting visibly agitated at the rough treatment he was handed from Everton’s defenders.

A rough challenge from Mason Mount on Yerry Mina also led to unsavory scenes as players from both sides came to the aid of their teammates just before the break.

Richarlison’s goal shortly after half-time changed the game as he dispossessed Cesar Azpilcueta to send the Everton fans into raptures, with the Brazilian forward picking up a flare from the ground and launching it back into the stand.

The home crowd were up from that point and nearly had the chance to wrap the match up as Vitaliy Mykolenko was played in, only to send his effort over the top of the crossbar.

Chelsea dominated play during the second period and forced Pickford into action on a number of occasions as the England stopper proved exactly why he’s so highly rated by Gareth Southgate and his staff.

Everton soaked up plenty of pressure but had chances to kill the game off as Demarai Gray sent an effort over the top of the bar with mere minutes to play.

With seven minutes of injury time to be played, Chelsea continued to push forward, but Pickford was having none of it.

The Sunderland-born stopper was unbeatable as he kept out Mateo Kovacic and played a crucial role in a victory that could go a long way to helping Everton to avoid the drop.

As for Burnley and Leeds United, both clubs will be anxiously looking over their shoulders in the final weeks of the season.

Demand for UK nursing degrees rises by a third in pandemic