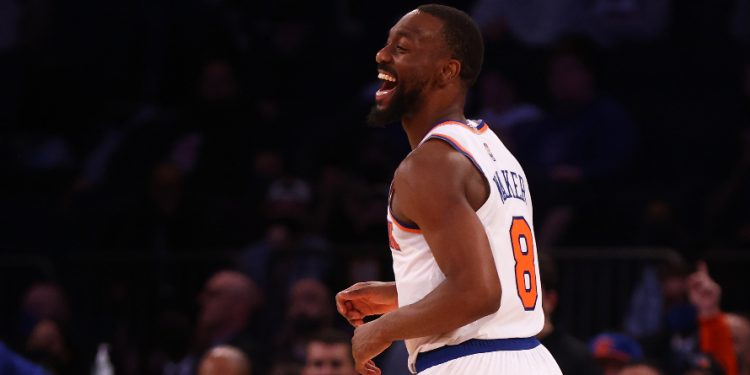 Kemba Walker has been in the midst of quite the resurgence since making his way back into the New York Knicks’ starting lineup. After being dropped from the team’s rotation altogether at the end of November and sitting on the bench for 10 consecutive games, Walker has become indispensable in recent days as injuries and COVID absences have led to him getting more run.

His most recent big game came on Christmas Day, as the Knicks hosted the Atlanta Hawks at Madison Square Garden and picked up a 101-87 win over the team that eliminated them from the postseason last year. While Walker didn’t put forth the kind of gaudy scoring output that we’ve seen since he was reinserted into the starting lineup, he finished the game with 10 points, 10 rebounds, and 12 assists, giving him his first triple-double since April 4, 2014, when he was a member of the Charlotte Hornets.

Mitch tips it out.
Kemba lobs it up.
Obi throws it in, reverse style!#NBAXmas on ESPN pic.twitter.com/M859tEHK4h

JULIUS IS FEELING IT TODAY AS KEMBA IS 2/3 HOME ON A TRIPLE DOUBLE pic.twitter.com/VVGtDRVaeO

“The #NBAXmas gift that keeps giving!”

Unsurprisingly, the 6-foot Walker hit the scoring and assist marks before he was able to haul in 10 rebounds. It led to some funny moments in MSG, as every single person in the arena knew Walker needed one more board to get there, only his teammates weren’t always able to help him clear the hurdle.

Kemba almost just knocked Alec Burks out of bounds racing after the 10th rebound. Didn’t get it. Still one away from the triple-double.

But ultimately, Walker was able to get there, much to the delight of the adoring fans in Manhattan.

The rebound made a little bit of franchise history. Not only was this the NBA’s seventh Christmas Day triple-double and the first since 2017, but it was the first time a Knicks player did this on Dec. 25.

Kemba Walker is the second Knick in franchise history to follow a 40-point game with a triple double. (Carmelo Anthony, April 2012). He is the seventh player in NBA history, first since 2017 and first Knick to post a triple double on Christmas Day. @EliasSports

It seems safe to assume Kemba Walker will not be removed from the Knicks’ rotation again any time soon.

Why Poland needs to develop a ‘learning society’