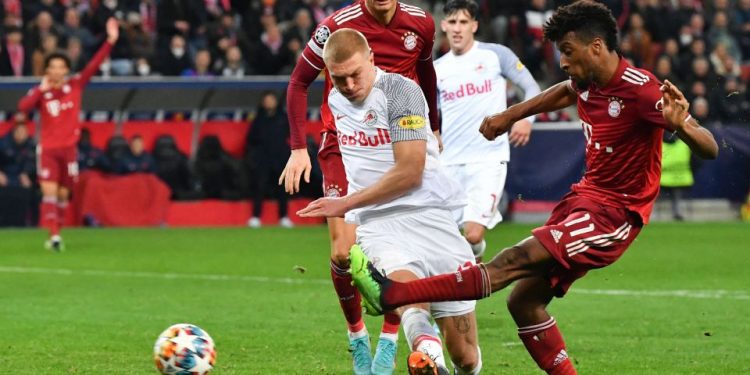 Substitute Chukwubuike Adamu beautifully curled in the opener for Salzburg, who looked like they could hold out for more than 70 minutes to seal a win.

Coman struck the equaliser in the 90th minuteGETTY

But Coman, who scored the winner against Paris St Germain in the 2020 final, latched onto Thomas Muller’s flick on to drill home at the far post.

Salzburg started in brisk fashion, but Bayern went close after 10 minutes when Serge Gnabry forced a smart save from Philipp Kohn.

Bayern fell behind after Karim Adeyemi drove at the home defence and Brenden Aaronson touched the ball into the path of Adamu.

It was a tightly-fought encounter in AustriaGETTY

The Nigerian, on as a 12th-minute substitute for the injured Noah Okafor, wasted no time in sweeping it past Sven Ulreich in the Bayern goal.

Aaronson soon forced a fine low save from Ulreich and English referee Michael Oliver ruled there was no contact from Benjamin Pavard when Karim Adeyemi fell theatrically in the Germans’ box.

Leroy Sane flashed a shot wide at the other end and Bayern dominated the second period without creating too many chances.

But the visitors were fortunate when Ulreich thwarted Adeyemi and the outstretched Pavard brilliantly blocked Adamu’s follow-up effort.