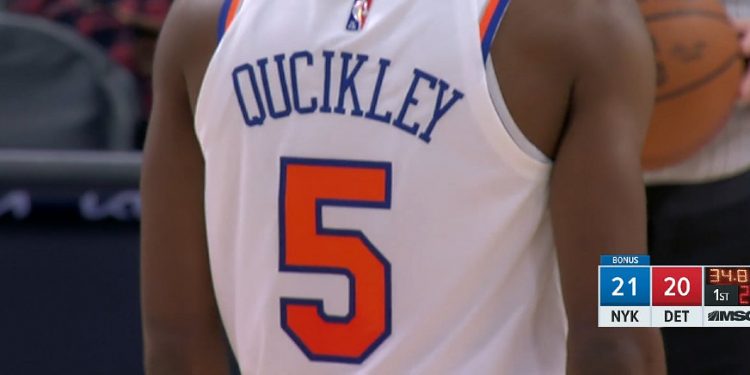 Editors matter, even for the back of NBA jerseys.

On Wednesday, as the New York Knicks played the Detroit Pistons on the road, Knicks guard Immanuel Quickley had his last name spelled wrong on the back of his jersey. Instead of “Quickley” his last name came out as “Qucikley,” which is close at least.

There are a lot of questions that need be answered here. For one: How was it Quickley’s jersey that ends up as the first misspelled of the season and not one of the dozens of players currently signed to teams on a 10-day deals. Quickley is a key member of the Knicks, one of their leading scorers and, particularly after the injury to Derrick Rose, a crucial part of their current team. You’d think it would be one of the new faces, some arriving on the day of games, that would end up in a hastily made jersey that has a spelling error.

Secondly, what is the editing process for nameplates on jerseys? Typos can happen — Quickley isn’t the first player to have his name spelled wrong, nor will he be the last — but it seems avoidable? Quickley also doesn’t have a particularly complicated last name to spell?

If there was only an adjective to describe the speed at which this jersey was put together and proofread.

Finally, this is the second jersey error in as many seasons for the Knicks, who sent Reggie Bullock out on the floor last year with the correct number on the front of his jersey but the wrong number on the back last year, which they joked about on the broadcast when they recognized the “Qucikley” error.

How this all happened demands some answers, which may simply be “take an extra second to double check the jerseys.” For his part, Quickley has nine points off the bench at the time of this writing. It is his second game back from being in the league’s health & safety protocols.

The Competitive Edge in Central and Eastern Europe