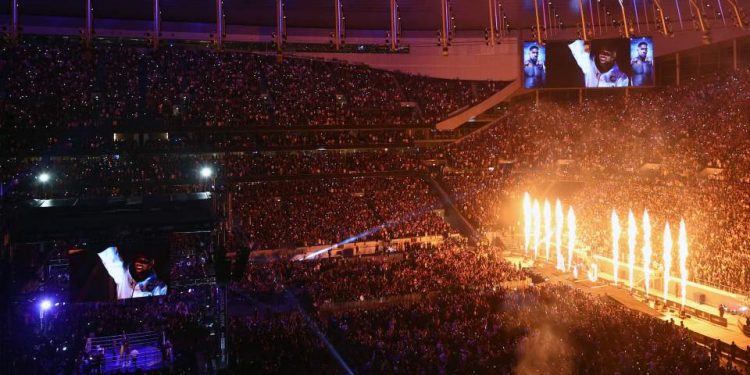 As 2021 draws to a close, talkSPORT.com looks back on what has been one of the maddest years in a sport which continues to amaze.

Whether it’s a sensational knockout, a fiery press conference or a spell-binding fight, boxing had pretty much everything.

Boxing in 2021 exceeded even our wildest expectationsAFP

Despite the difficulties presented by the resurgence of the COVID-19 viruswhich gripped the world, fans were still treated to spectacular and senseless boxing moments in equal measure.

‘The Mountain’ staggered in exhibition fight – May 2021

While Hafthor Bjornsson may not have secured his lucrative boxing bout with Eddie Hall just yet, the former World’s Strongest Man continued his foray into boxing.

‘Thor’, as he is affectionately known, faced former MMA fighter Simon Vallily and was given a thorough examination.

After being staggered early on, ‘Thor’ did hit the deck in the third round and it proved to be a rather frantic affair.

“He’s awkward, he’s a big man, getting physical,” Vallily said post fight. “I seen his last fight and credit to him, he’s come on a lot.

“He’s got a lot of potential. I’m not just saying that.”

Then Thor hit the canvas, but it was not a knockdown

Billy Joe Saunders knew the odds were stacked against him when he travelled to Dallas, Texas to face pound-for-pound superstar Saul ‘Canelo’ Alvarez in May.

However, after sustaining a fractured eye socket, the 31-year-old was pulled from the fight and it sparked scenes of wild jubilation.

Fury and his half-brother Tommy were in the front row and got caught up in a ruckus, all of which was filmed on camera in the immediate aftermath of the fight’s finish.

Before Logan Paul was scheduled to fight arguably the greatest boxer of all time, his own brother had to be banned.

Jake Paul – who had just knocked out Ben Askren – rocked up at the Hard Rock Stadium in Miami for a standard pre-fight press conference.

However, the former YouTube star ensured it was anything but when he faced off against the 50-0 star and proceeded to take the hat from his head and yelled, ‘Gotcha hat’.

A brawl ensued between Mayweather’s security team and Paul’s friends, with the end result being the younger Paul brother getting banned from the fight and proceeding to get a ‘Gotcha hat’ tattoo.

A month later, the two men who were supposed to be fighting did just that and it was as much a freak show as it was a spectacle.

As well as appearing to keep Paul up after knocking him out, Mayweather bragged about just how much money he made from a sponsor on his shorts.

Yet it was the reaction of heavyweight legend Mike Tyson which really made headlines afterwards, with ‘Iron Mike’ massively confused by what he saw.

“I think Floyd should keep on trying,” he said on Instagram Live. “I don’t think he should fight a f****** cruiserweight.

“I think he should continue fighting guys his own weight. What the f*** is he doing? Fight [Manny] Pacquiao again or something, keep in shape.

“Now that I think about it, he should have had Paul lose a lot of weight. I was surprised [he didn’t do that]. A smart fighter would have made him suffer, made him starve.

“It was harder than Floyd anticipated, I believe.”

The trilogy fight which nobody appeared to want exceeded expectations and then some as it proved to be one of the greatest heavyweight fights of recent times.

Fury faced some adversity before triumphing and retaining his WBC title, being dropped twice in the fourth round.

Rogan has alleged referee Russell Mora afforded the Brit a ‘long count’ and suggested the official had perhaps panicked.

“The referee is supposed to go ‘One two…’ when the guy goes down. But if for any reason he has to interrupt the count… you’re supposed to pick up the count where the ringside counter has it,” said the host of the Joe Rogan Experience.

“So there’s a guy who’s counting ringside, and he’ll keep the count going. So if you’re at ‘One, two,’ and then you’re like ‘Go to a neutral corner,’ that guy is supposed to be like ‘three, four, five,’ but he didn’t.

“He went back to it, ‘three, four,’ but the guy had already been down for a couple seconds. Without a doubt it was a long count. I think it’s an error, or corruption. Most likely an error, most likely the guy’s panicking.”

Although Tommy Fury pulled out of the fight with a severe chest infection and broken ribs, ‘Big John’ managed to once again steal the show.

Whilst speaking from a lilo in a pool wearing sunglasses and sipping on a cocktail, Paul continued to goad the elder Fury until it finally reaching boiling point.

“You thank your lucky stars that I’m banned from your country”, he told Paul, before standing up and appearing to square off with the TV.

Eagled-eyed fans made the comparison to Conor McGregor, who literally paced up and down while glaring at his own screen before Max Holloway’s fight with Yair Rodriguez.

After Fury pulled out of the fight, Paul instead rematched Tyron Woodley and duly knocked out the former UFC champion in just six rounds.

The Bulgarian heavyweight, who has not fought since he was knocked out by Anthony Joshua in December 2020, ruthlessly stopped Mir and wobbled him alarmingly.

Pulev went nine rounds with Joshua in London less than a year ago, but needed just one to seriously hurt Mir with an overhand right and followed up with a cuffing left hook.

The Triad Combat rules ensured both men wore MMA gloves and were allowed to clinch and punch inside the triangular ring.

Mir, 42, was a UFC fighter for 16 years and held the heavyweight world title on two occasions – recording the most finishes and most submissions in the promotion’s history for heavyweights.

Although both men are grizzled veterans of combat sports, the disparity in the boxing levels was embarrassingly evident and referee Dan Miragliotta came under fire for not stopping the fight earlier.