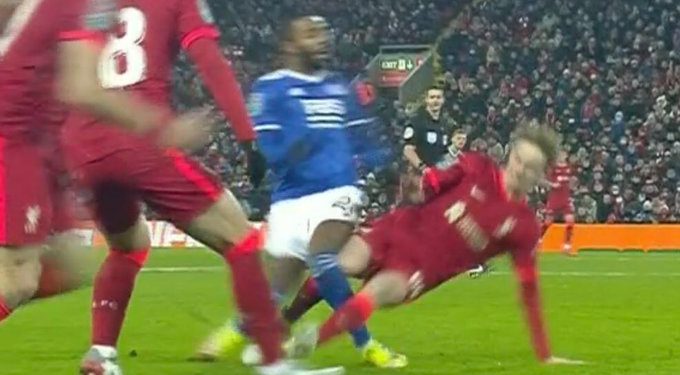 The 19-year-old Reds starlet lunged into the horror challenge during the team’s Carabao Cup quarter-final thriller last week, with Liverpool progressing on penalties.

Liverpool starlet Morton was guilty of a horror challenge on Pereira, which left the Leicester ace with a broken bone in his legSky Sports

Pereira, 28, writhed around in pain on the pitch and then hobbled off after the dreadful tackle from teenager Morton, who jumped into the full-back with both boots off the ground.

It was clearly a terrible foul, with the Foxes ace left in severe pain, and yet Morton was only dealt a yellow card by referee Andrew Madley at Anfield.

Fans have been left to wait on news of their right-back’s injury, and boss Rodgers revealed the extent of the problem following Leicester’s 6-3 defeat to Man City on Boxing Day.

“Ricardo Pereira will be [out for] six to eight weeks,” said the Foxes and former Liverpool manager.

“That’s so frustrating for him with how hard he has worked.

“For the referee not to see that, it’s a fractured fibula and he’s lucky it’s not worse.”

The horror tackle from the Liverpool man made for ironic timing, after Jurgen Klopp blasted referees for letting off Harry Kane for his bad challenge on Andy Robertson.

Robertson was later sent off in the 2-2 draw with Tottenham on December 19, with the Scotland captain apologising for his actions, which led to questions being asked of England skipper Kane who said nothing about his tackle on the full-back.

However, Morton made no public apology or comment to Pereira after their cup clash, with Klopp making no reference to the incident after the game, either.

And it could lead to an angry reception for the Reds when they travel to the King Power Stadium to face Leicester again in the Premier League on Tuesday.

His broken fibula is the latest injury blow for Pereira, who has struggled to rekindle his best form since suffering an ACL injury in 2020.

It also adds to the Foxes’ injury crisis at the back, with defenders Jonny Evans, Wesley Fofana, James Justin and Caglar Soyuncu also currently on the sidelines, while there are fears ove Ryan Bertrand after he limped out of the warm-up ahead of the City mauling.

Portugal international Pereira took to Instagram after Leicester’s Carabao Cup exit at Liverpool’s hands, and hit out at officials for their response to Morton’s bad tackle.

“Perspectives,” he wrote on social media.

“You can say I should feel unlucky after coming off in my returning game and part of me is, but after what could be a season-ending tackle, what could be an ACL, I’m feeling lucky it’s none of those even though I’ll be out some time.

“Like I say, it’s perspective. For some it was just a yellow card.”

What Is a Climatarian Diet? Science-Based Tactics for Eating Healthier and Eco-Friendlier